What can you do with a 19th-century Congregational Church when there are not enough faithful to sustain the big building and grounds?  Up in Deerfield, the former church languishes, empty, but in Florence, a Bombyx has turned things around mightily.

An Interview with Cassandra Holden, one of the people behind the new Bombyx Center for Arts and Equity in Florence 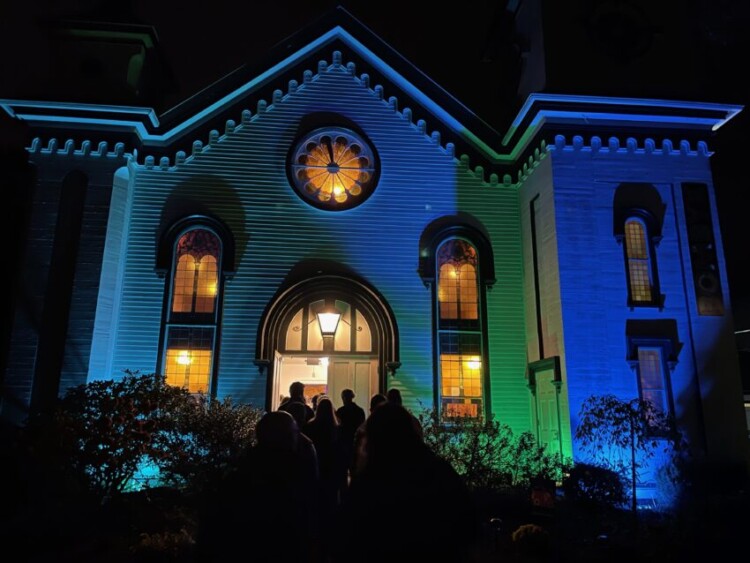 The Bombyx mori was a type of moth that was domesticated to produce silk, and Florence is famous for the production of the fabric back in the days before nylon. Men’s fortunes and the coffers of the Congregational Church all came in thanks to the lowly moth with the funny name.

While the pews are still mostly in place, the new owners Kyle Homstead and Cassandra Holden have built a mighty big stage to accommodate the wide variety of musical acts they enjoy bringing to the Valley. 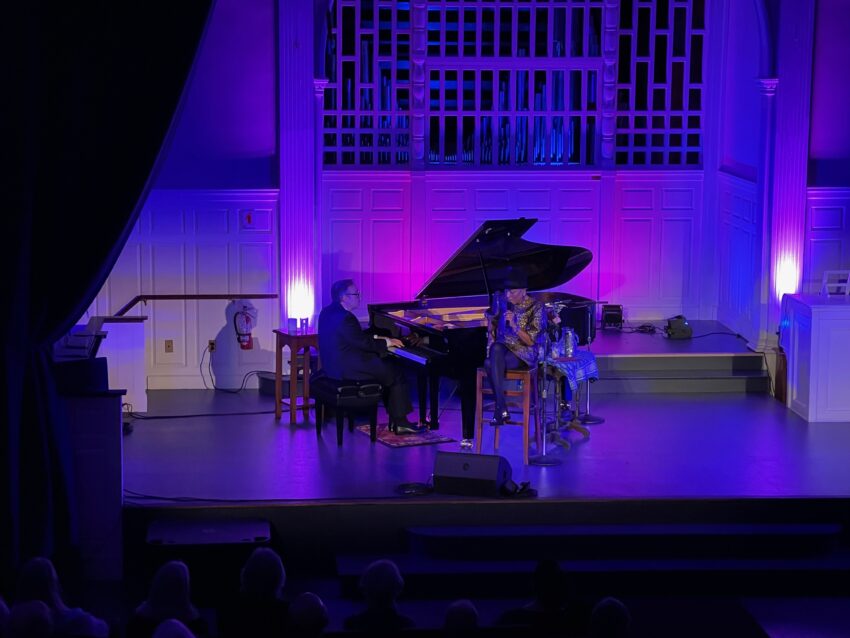 The church has a large hall attached to it by a covered corridor, so the big space can be used for weddings and other large events along with the music and other entertainment.   The opening night brought two sparkling performers…Deedee Bridgewater and Bill Charlut.

Bill has the master’s touch, as light as a feather, but he plinks just the precise right note every time. He coaxes the absolute maximum out of every touch of the keyboard. And the songs the pair chose were the standards that quickly become familiar.

Deedee is confident, brassy, right on point with the scat singing that mimics brass and woodwind instruments.   She also has an easy pater with the audience, teasing shy Bill into speaking up about the songs he chose.

The Bombyx Center will have an exciting full slate of concerts coming up, and so far I think they are going to be very successful.

I asked Cassandra about Bombyx and her vision of the future.

When did you decide to open Bombyx, what was the situation with the church that made you go for this big-time like this?

The Florence Congregational Church (FCC) has been struggling for a while. Their membership is dwindling and the project of maintaining the property was becoming a burden.

Two years ago, Priscilla Ross approached us. She was forming a non-profit with the intention of purchasing and preserving the FCC and keeping it available to the community as a resource.

Along came COVID, and Priscilla, who works in health care, was overwhelmed responding to the pandemic. The project ground to a halt.

Fast forward a year. Bombyx incubated in my imagination. The congregation was still looking for a buyer.  They weren’t interested in selling to a developer or an entity that would push them out.

They were clear that they wanted to continue to hold services there, as did Beit Ahavah (the reform synagogue). Cloverdale (preschool) wanted to stay too.

I love the idea of a performance venue that is also a sacred space…and a pre-school…and, most importantly, a place that feels welcoming and accessible to the community. Next weekend, we have three performances, a wedding, and two religious services happening. What fun!

These overlapping uses mean that a broad cross-section of the community has a positive connection to Bombyx. As you know, our programming is centered around knitting communities together. Bombyx is the next iteration of that.

Laudable has presented all over the Valley. We’ve been in proper theaters and unconventional spaces. Having a center of gravity means that we can take on different types of projects and create the room we’ve always wanted to work in. We can also offer programming with greater regularity.

Have no fear, we will still continue to collaborate with other venues, in fact, we have shows at Gateway City Arts and Hawks & Reed coming up in the next two months.

Do you have additional backers who helped fund the purchase along with Kyle and yourself?  Who else is behind Bombyx?

Kyle and I are bootstrapping this ourselves with the support of a few individual donors. We’ll be launching a capital campaign in the coming weeks to support Phase 1 renovations.

We are also pursuing a variety of sources of grant funding. It’s a big lift bringing this historic building into the twenty-first century.

Who would be your dream performer, which artist can you see as being the ultimate “get” for Bombyx?

Securing Terence Blanchard, who performs 11/14, was a major “win”. He opened the Met Opera’s 2021 season with “The Fire Shut Up in My Bones” and is the first African American composer to debut work there. His performance at Bombyx will likely be the most intimate stop on his tour.

We enjoy the puzzle of bringing artists’ unusual projects to the stage. It’s less about who they are and more about what they’re creating and how it moves our audience.

Besides world music, what else can we expect to see on the Bombyx marquee?

The short answer is a little bit of everything – carefully curated.

We have a track record of presenting “music from everywhere” which we prefer over the term global music and you can expect to see plenty more of that on the calendar. The space also lends itself well to Jazz.

Musicians love the space –it’s a beautiful room with good acoustics and you can feel the energy of the audience. Bluegrass trio, the Wildman’s, kick-off first of our Bombyx Barrio nights. For those living in the 01062 zip code, tickets to that show are buy one get one free.

In addition to music, there will be artist talks, exhibitions, dance performances, film screenings, master classes, workshops, and more.

Actually, for our soft opening, Native American scholar Yvonne Tiger gave a talk about the life and work of artist and illustrator Angel DeCora. That exhibition will be up through December and there is more programming to come in conjunction with that show.

Starting this week, Artifact Cider and Building 8 Brewery will be serving craft beer and cider at each performance. We are currently in the process of updating the kitchen so keep your eye out for restaurant pop-ups and guest chef appearances in the not too distant future.

In 1842, a group of activists, farmers, and silk manufacturers banded together to form the Northampton Association of Education and Industry (NAEI).

Founded on the principles of abolitionism, temperance, gender equity, and religious tolerance, the group established a silk mill and utopian community in the village now known as Florence, MA.

Members of the community and their invited guests would meet under a massive old growth pine to debate issues of the day and hold important meetings.

While the community lasted just over four years before disbanding, members of the group went on to establish the Florence Congregational Church (FCC) in 1861, bringing their radical values with them.

The church now stands where that pine use to grow and its descendants frame the grassy lawn behind the building.

Our work is the next chapter in an already long history of bold, creative thinking. We are more than a music venue.

We plan to host artist talks, exhibitions, dance performances, film screenings, master classes, retreats, residencies, and workshops in addition to concerts. Many of the artists we present are also activists.

We are committed to giving them a platform for sharing their work and engaging our audience in challenging conversations. We also understand activism as a global movement toward equity, not just a local one.

We are grateful for the opportunity to bring ideas from around the world to Florence.

What other physical changes do you guys anticipate making to the church buildings?

There’s a long list! Phase 1 renovations, which we hope to begin over the summer, include the creation of a more gracious and accessible entrance, redesign of the parking lot and connection to the street, and expansion of the existing office spaces and restrooms.

With the help of our Project Architect, Marc Sternick, we are also looking at ways to “green” the building. The church is in remarkably good shape.

The former Pastor, Irven Gammon, is a builder and was able to stay on top of necessary repairs. And I would be remiss if I failed to acknowledge Wayne Beaumont and Phyllis Maggiolino who along with the rest of the congregation have volunteered countless hours maintaining the structure and the grounds.

In the short term, we will be removing the pews in the Sanctuary and replacing them with flexible seating – allowing us to have shows with a mixture of seating and dancing and making it possible to hold meetings and other types of events there.

We will also be updating the Parish Hall, making it a proper gallery and gathering space.

What else do you think are the most important aspects that need to be publicized about Bombyx?

Here are a few practical details:

+ to attend an event at Bombyx, attendees will need to provide proof of vaccination (or negative PCR test result within 72 hours of admittance) and remain masked except when eating or drinking.

+ Florence has a rich history of activism – and we are looking forward to sharing that with our audience. Both the David Ruggles Center and Historic Northampton do a remarkable job of bringing history alive. We need to understand our history to understand our present.

Here’s one vision for the future:

Once we sink our roots down, I look forward to inviting visual artists, musicians, dancers, and other creatives to come for residencies – staying in the area, connecting with the history of the region, and creating new work inspired by it.

I hope that folks will develop long-standing relationships with this community. I think we can offer a retreat experience that supports the kind of creative and professional growth that artists hunger for.