Rangeley Inn Maine: Not The Same This Year

On Saturday morning, Sofie and I awoke in subzero Rangeley, Maine, after a pleasant, relaxing night at the Rangeley Inn.   Everything was different during our Pandemic visit, with all of the comfortable maroon oversized chairs and couches stashed away in a locked porch.  Even the one remaining couch is covered to keep anyone from sitting there. We came up to go skiing at the two nearby resorts, Sugarloaf and Saddleback Maine. 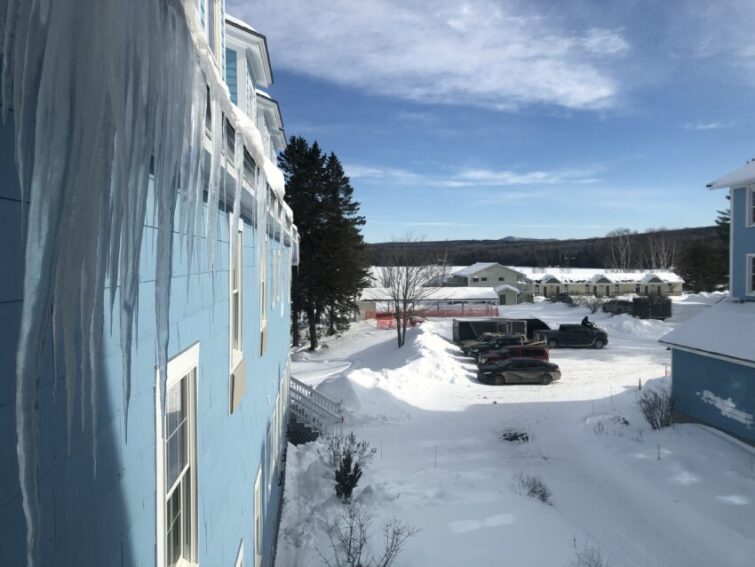 I looked around the room at the huge stuffed bull moose, and the standing black bear taxidermy and I chatted with the manager.  “It’s been very hard to keep staff, ” she said. “Most people don’t live up here all year long, and so we’ve been short-staffed. We have also had to lock the front door, which is really different for us, people usually are always coming in from outside. ”

I was fascinated when I looked at a big bookshelf that held leather-bound volumes of National Geographic Magazine. Each year the familiar issues of the yellow magazine were neatly organized going from 1933 until 2010. I wonder what happened after that year since there was still room left on the shelf.

The manager in her mask pointed out the window to the newer building out back near the pond with 15 rooms. “We’ve only been able to use those rooms, not the 31 inside, until just recently.”  The parking lot was full of snow machines, and the big trucks and long trailers that tow them up here to the epicenter of the sport.  The sleds zoom over the frozen pond and over parts of the much bigger Rangeley lake, but she said they only ice fish in the small pond, no one fishes on Rangeley. “You should have seen how busy we were in 2019, it was just crazy!”

Today the classic old Tavern at the Rangeley Inn is closed, and they send guests across the street to Sarge’s Sports Bar for food.  We called in our order and when it was ready I walked in, the place packed with snowmobilers and locals. I had tried to order from the photocopy of the menu the manager shared with me that turned out to be four years old. Oh well, things cost more now. 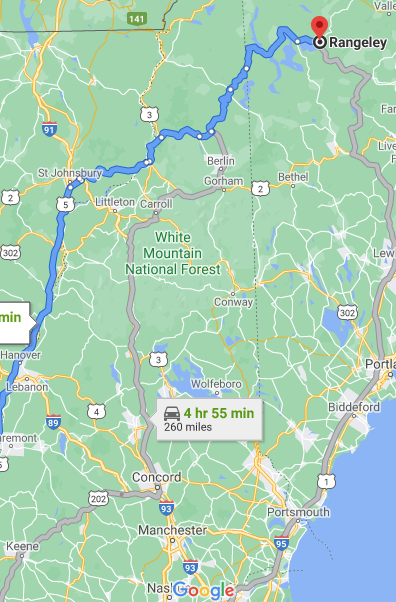 On the drive home, the GPS took us on a winding small-road route that veered west, instead of the dreary monotony of the Maine Turnpike, that heads down through Portland. The country road route was full of Trump/Pence signs, even though the election is many months behind us.  That always sticks in my craw, those who support the loser and insurrectionist, but people up here really did go for him, just like they supported their own Mini-Trump in Governor Paul LePage for two terms.  I met many people from Portland who absolutely hated LePage, but in the country, his conservative voice was appreciated.

We stopped for gas in Epping NH and walked into the huge LL Cote and Sons General store. All around us were snow machines, big trailers and men crossing the road scraping their rigs on the pavement and standing up on their snowmobiles. I got Sofie a pizza from Subway–big mistake–it was the worst pizza we’d ever laid eyes on, so bad that we actually tossed in the bin and went back to get a regular slice from the rack.

I realized how different northern New Hampshire and Maine are than Massachusetts or Vermont.

It’s a vacationland for folks who prefer loud machines over silent XC skiing, and often these enthusiasts have a much different way of looking at things than I do.

Despite our differences, everyone in the north country we met was friendly and welcoming, and I enjoyed our drive on the long road back home.

It was great being back on the road, exploring, discovering, and skiing on those huge mountains. Two days on the slopes was plenty, now I got my ski fix for the year 2021.