Memorial Day is Always a Day of Uncertainty, but Sometimes It’s Great 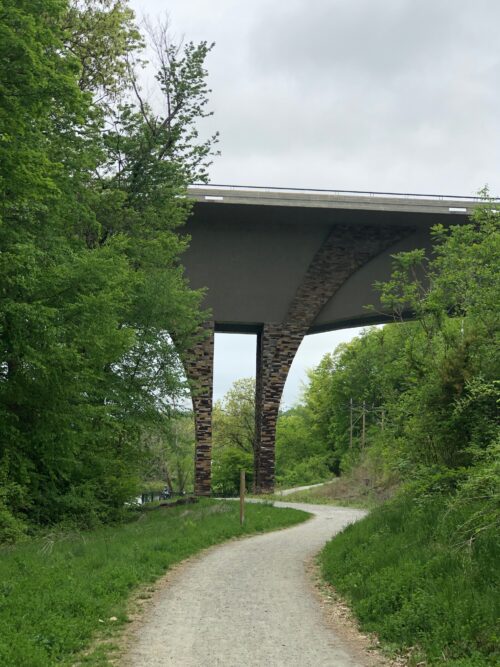 I’ve written many times over the past sixteen years on this blog about my aversion to holidays like today, Memorial Day.

I’ve always felt a bit out of sorts during these holidays because I rarely make the right plans and end up doing very little.  I would rather just pack my lunch and go to the office.

This year, of course, it’s all different in this world where having two Saturdays in a row still means staying in, seeing no one, and no excitement. But I always enjoy seeing what I was doing on other years on this day.

We made the day ours by doing what we’ve been doing during the pandemic. Taking a drive somewhere north, finding a great place to hike, and once again not spending a penny. We hiked the West River Trail on the north of Brattleboro, near the Marina.  We discovered a beautiful tall bridge built with local stones that soars up the sides of a bridge over Route 91.

Last year I was with my traveling buddy Jack Dunphy on a three-day trip to Worcester.  I am still impressed with this city and after this is over I can’t wait to drive there and see the five-way intersection all fixed and their new public market full and open.

In 2018, I was in Denver Colorado, and rode a steam train through the mountains, enjoying the big IPW show that was canceled this year.

In 2017, I joined Mary’s big family for a big wedding at the Nemacolin Resort, a killer drive almost all the way to the end of Pennsylvania to celebrate the marriage of Natalie and Will.  I remember that where we stayed they had a pen full of exotic animals including lions that roared during the night.

In 2016, I was in Houston for a travel conference. I really dug this marvelously diverse city, where 700+ languages are spoken. I rode my bike around the Buffalo Bayou trail that had recently flooded but like always, quickly recovered. What a great city!

In 2015, over the holidays I wrote about how sad I was that my daughter had gotten separated from her husband, and my ex-wife and I were helping out with babysitting. It was an unsettling time, I’m very happy that both Kate and Francisco are much happier now with new partners.

In 2014 I was in Portugal with my traveling buddy Paul Shoul. I remember being in the university town of Coimbra, it was in the midst of the European economic meltdown and people were sad, not making enough money and things were very difficult.

In Memorial Day 2013 I enjoyed a weekend of culture, visiting the “Big City” of Northampton twice, first for a concert of Arab music and then for a radio play called “Life in the 413.”

In May 2012, I was contemplating a huge big move. Kate and her family would move out and leave the house in South Deerfield for Mary and I. It was a momentous occasion and happy since they quickly bought their own house in Deerfield.

On Memorial Day 2011, I published a book review about a World War II book, I wasn’t traveling that year.

On Memorial Day 2010, I was in coastal California, I met a writer friend there and then explored Sacramento and the coast. I remember visiting a man who owned his own fire department and served us drinks.

Having a blog gives me these chances to look back to cherish and appreciate the wonderful things that I do in my life. It’s hard looking at that photo up top, those empty chairs that currently, might be the only way we can socialize.

Mary just has to get the nerve up to spend time with friends again, during this terrible time of isolation known as the Pandemic of 2020.