“This is a military museum for people who don’t like the Military,” said Wolfgang, our local guide in Dresden Germany as we drove up the impressive Daniel Libeskind-designed building that features a giant wedge inside the 19th-century facade.

Indeed, I was hardly prepared for the experience once we joined a German officer and our tour guide in an elevator to the fourth floor where you walk inside Libeskind’s aluminum and steel wedge.

It is here where the horrors of war are all unpacked.  In a simple display on a platform of unadorned wood, a series of photos and text tell the heartbreaking stories of World War II.

One focuses on the obscure Polish village of Weilun, population 16,000 and its destruction by the German Luftwaffe on September 1, 1939.

War had not been declared at this point, and the bombs hit the local hospital, clearly marked by a Red Cross sign.  The attack killed 1200 civilians and destroyed 70 % of the town.” 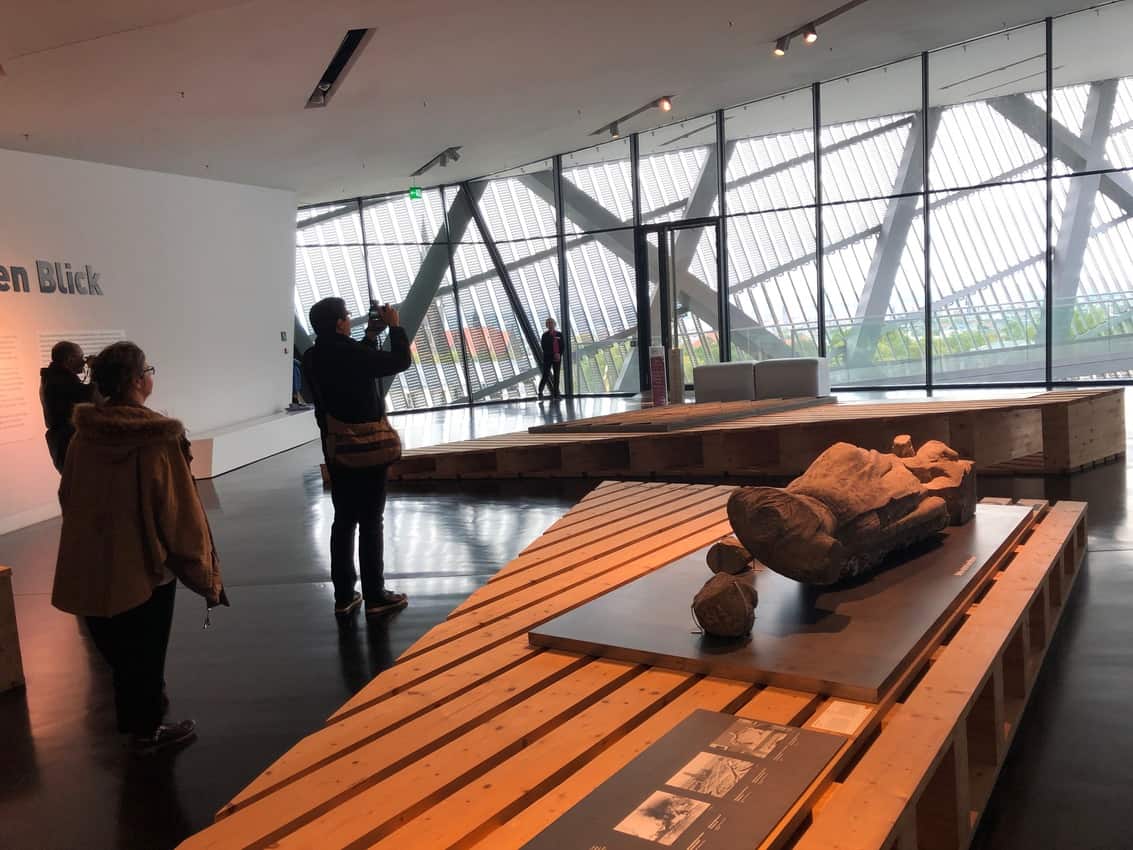 Then they show two of the people involved and tell their stories…the airman in the plane who dropped the bombs and a child who lived through it.

In other panels, the terrible February 13-15, 1945 firebombing of Dresden is explored, again through the eyes of the local victims and the people dropping the bombs.

Up to 25,000 people died here. The high explosives were intended to rupture water mains and blow off roofs, doors, and windows to create an airflow to feed the fires caused by the incendiaries that followed.  This was in the last stages of the war and the Allies were testing out new ways to kill people.

This impressive museum was built inside the barracks complex built during the Franco-Prussian War, to house thousands of soldiers.

We began in the wedge, where other details of the terrible toll war takes are revealed, in all aspects of life, including children’s toys, fashion and technology.

When Hitler proclaimed “I have the youth,” he was right, since popular toys drilled the message home about the importance of the cult of the Fuhrer.

Tiny die-cast toys show the Fuhrer’s salute and his famous black car. There is even a doll house where the tiny people wear armbands and have a shelter in the back.

Other exhibits explore the ways man has used animals to help him during wars over history, from bomb-toting dogs to dolphins carrying sonar devices.

The museum has thousands of artifacts, from a submarine to vehicles to a wall-mounted helicopter and in other rooms I viewed the various uniforms and equipment from centuries of battles involving Germany.

There is really too much to take in here if you’re interested in the military and the exhibits cover War and Memory with more than 1000 exhibits about war in general and how people in Dresden remember it.

If you are ever in Dresden, I urge you to visit this spectacular place, which will leave you feeling a little different about military history.