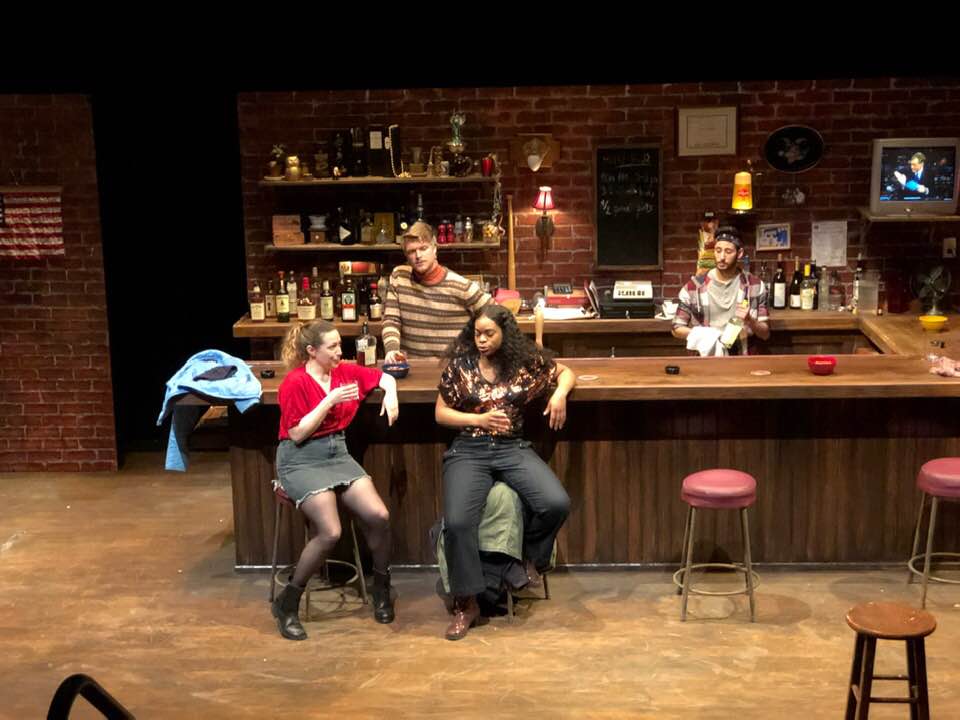 In a run-down bar in Reading, PA, the regulars are all here. Berks County is the setting for Lynn Nottage’s Pulitzer Prize-winning play, “Sweat,” and at UMass Theater, they’ve done an excellent job conveying the messages of despair and trying to answer the perennial question, ‘What went wrong?’

It’s the year 2000, and the women in the bar, Tracey, Cynthia, and Jessie are celebrating a birthday, as the disabled bartender, Stan looks on. He knows what their lives are like because he used to work in the factory with them, the one where everybody around here works or has worked.

While there is happiness among these three tipsy friends, there is trouble looming. Things are unsettled, we know this because we are watching the news text crawl across the top of the stage, the CNN or FOX News ticker, showing us the headlines and the date…it’s 2000, and things are going to get tough.

The set of this production is one of the stars–a realistic rural Pennsylvania working man’s tavern, with a c-shaped wooden bar and Schmidt’s neon beer signs and barflies who are all in the same boat.  That is, until one of the women, Cynthia, wins the chance to be promoted to management, lifting her up, up and above her peers who still labor on the shop floor.

But it’s a short-lived dream, an ambition that quickly creates a rift when things at the plant begin to go wobbly.  We are clued into this when the Colombian immigrant busboy at the bar shows the group the posters put up in his neighborhood. The plant is looking for scabs to come in and replace the union workers.

The friends see their former worker become the boss, and they think she has a way of preventing the inevitable–the plant has sold off some machines and has given the workers a terrible ultimatum, a 60 percent pay cut, with fewer benefits.  They vow to fight, but everyone including them knows that this is just what happens to American factory workers. They never win.

As we hear from Oscar, the immigrant, he too wants to get a chance for higher pay. He’s glad to take the job for $11 an hour at the plant, despite the protestations of the out of work union workers.

Tracey, Jessie, Tracey’s son Jason and Cynthia’s son Chris all hate the scab and attack him, injuring bartender Stan in the fracas. We scoot ahead to the year 2008, and Obama has been elected, but now there is more economic terror…it’s the big collapse.

By now the plant is long closed and Tracey has succumbed to drug abuse, and Jason wears Nazi tattoos from his time in prison with Chris, paying the price for turning Stan into a wreck of a man.

But Oscar has survived, even prospered. We see the bar has been transformed, eight years later and it’s a stylish joint with fewer factory workers at the bar. “We get a lot of college kids in here now,” Oscar explains.

We are reminded of the times by what’s on the TV. First, it’s President Bush on The Tonight Show, then it’s Regis Philbin on Who Wants to be a Millionaire, silently flickering and giving us context, along with the ominous newscasts that provide glimpses into what’s going on in the world. It’s all glum and it has turned one-time good pals into envious enemies.

And as the union workers face layoffs and insults, poor Oscar the busboy just wants his shot. He’s not trying to take money away from the workers, he just wants a chance to make a better wage, scab or not. Sadly, it becomes a sad cycle and we all know that no one wins.