Valley Voices Story Slam: Have You Got a Good One to Tell? 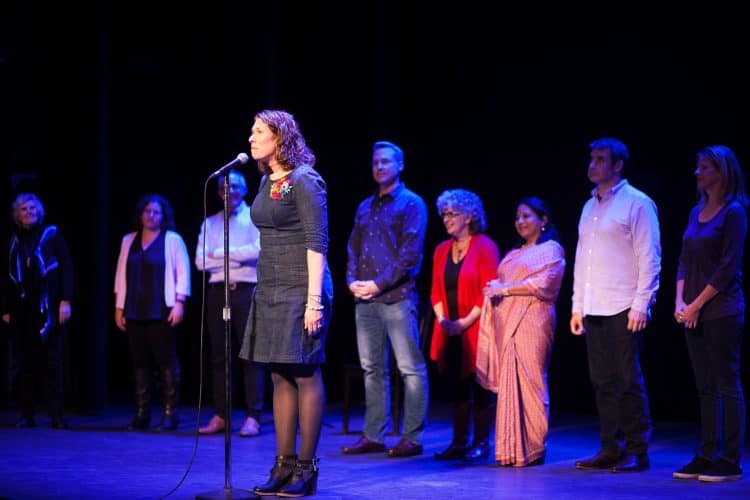 One of the offshoots of the podcasting revolution is that spoken word, storytelling, is becoming a big deal.  All over the U.S. people are sharing their stories, either in long forms like Tedx, and doing stand-up comedy or a particularly interesting new concept–the story slam.

I have enjoyed several of these shows locally including a Valley Voices Story Slam produced by New England Public Radio and The Academy of Music at the former Hinge Nightclub in Northampton. It was a hard fought battle but Josie Dulles won the night. . What I liked about the story slam is that it’s so homegrown. It’s all in the storytellers head, they just have to challenge themselves to remember little details, and if they can stay the course, and win the most applause, they come out the winners.

On June 6, there will be yet another story slam, but the venue is TBD until they pick the venue.

Valley Voices Story Slam’s 5th season is now underway, and I’ll be attending tomorrow night’s sold out slam at Gateway City Arts – the theme of the night is “In The Mood.” Like “In The Mood,” the next several events in the season are already sold out, but the final slam scheduled for June 6, when NEPR and the Academy of Music will take the show on the road…the venue, and tickets will be announced soon.

The only way to get into the next two shows at New City Brewery on April 4 and May 2 is through the stage door, so check out the Valley Voices website to find out how to audition for slams with themes including TMI, Busted and Open Road.

Not quite ready to make the leap on stage? Join the Valley Storytelling Community on Facebook to learn about other slams and storytelling events around our fertile, brainy valley.

HERE’S HOW TO AUDITION

Storytellers will be selected based on the strength of their first line and will be invited to share their story live at Valley Voices. Selected storytellers are encouraged to attend a free storytelling workshop, which will help to cultivate personal stories into performances. Storytellers will be offered the opportunity to purchase one ticket for a friend – we know you want moral support while you’re up on that stage!

The Valley Voices Podcast is available at nepr.net and wherever you find your podcasts.

For more information, contact Vanessa Cerillo at 413-735-6605 or vcerillo@nepr.net