Business Wars: The Saga of Barbie vs GI Joe 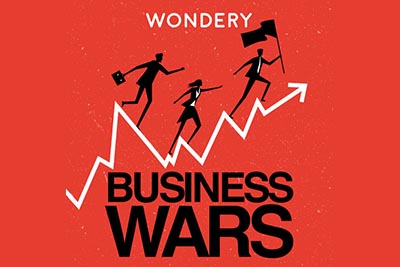 One of my favorite podcasts is Business Wars, where host Daniel Brown creates compelling dramas out of business titan’s competitions.

Some of my favorite previous business battles are Nintendo vs Microsoft over videogame consoles and about gangster rappers Tupac Shakur and Biggie Smalls, both of whom died in the fights. You can do a lot with a good narrative filled with bloody hits, rising from the ghetto to multi-millionaire stories and a few select musical interludes mixed in.

Today I enjoyed listening to “Barbie vs GI Joe” part 1 and 2 of a four-part series of episodes following Hasbro and Mattel starting in 1952, the year Mr. Potato Head was invented. This toy was the only hit by Hasbro, a Rhode Island-based maker of pencils, who wanted to expand into toys.

A couple, Elliott and Ruth Handler who co-owned Mattel, based in Los Angeles, take a 6-week vacation with their children, Barbara, and Kenny, to Europe. In Luzerne Switzerland, a window display caught her daughter’s eye. There were beautifully dressed dolls, with all sorts of accessories to match.

These were actually in the store window for men to collect, called Bild Lilly dolls They were used as gag gifts and to adorn car rear view mirrors.  But in 1956, Ruth returned to LA with a few of the dolls in her suitcase and eventually, she became Barbie.

The Ken dolls followed just a few years after, and the makers had to determine how to build the bottom part, they had three prototypes. One with nothing, on with a bulge, and one with, well, actual anatomy. It was an easy vote, but there was a compromise. The dolls would come with unremovable boxer shorts, right from the factory.

But when the Ken dolls were shipped, no one at the factory could figure out how to make the boxers unremovable so they were not affixed.

The story goes on to talk about how Hasbro got their revenge, by creating not a doll, but an action figure, and they called it GI Joe.