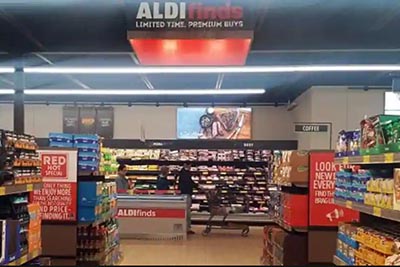 I’m breathing in a sigh of relief…I can just feel how much I am saving by switching supermarkets to Aldis!  For the past seven years, I’ve been forced to shop at the most expensive store in the world–Whole Foods.  And Trader Joe’s was the second store, but both are not cheap. Not compared to Aldi’s.

The place is so much cheaper than any place I’ve EVER shopped, it’s shocking. That you can buy things for $1.59 any more. Wow. Anyway, I have fallen into the Aldi’s trap, those super cheap prices just reel me in, and I guess I probably buy some things that AREN’T cheap because I think they would be.

I think to have a grocery store that’s only 10,000 square feet, allows one to yell for one’s partner should they get lost, and easily hear their reply…that’s my kind of store.  I like that there aren’t an army of employees, bakers, bread cutters, pizza makers. No, here the cashiers wear the box cutters on their belts and they do everything to keep the store humming.