Wallow Takes You to the Farm then to the Sea 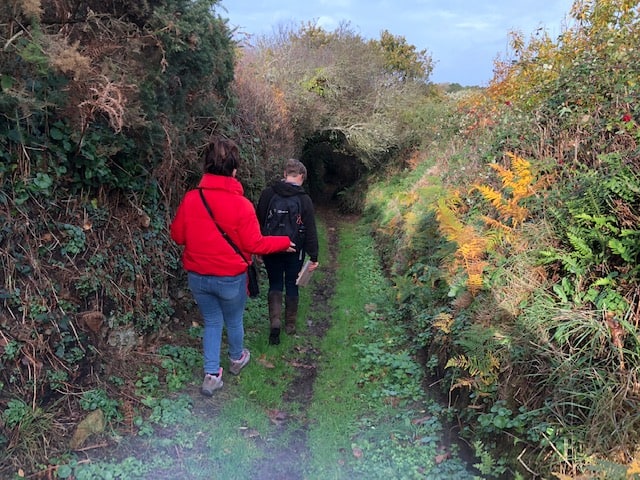 We had a rendezvous scheduled with a few dozen Oxford Sandy and Black pigs and piglets who live in small Quonset huts on a hillside overlooking the ocean.  Their master is a pair of Guernsey siblings, Nicola Terry and her brother, who together have begun to offer a combination farm tour and history lesson on the island.

It’s just about the best thing you can do on a Saturday morning after a big storm. The air was clear and crisp, and the sunlight glinted off the trees and the pigs ran towards us hoping for a treat.

Unfortunately, their diet is limited to the grain they get twice a day and the roots that their snouts unearth in the meadows where they are penned. No table scraps for these future charcuterie stars!

The tour begins with a look at how the pigs are raised, and then proceeds to a hilltop set of more pens, and then a delightful stroll through nearly covered footpaths that wind past beautiful homes and eventually gets us to the ocean.

Nicola brings with her a packet of old photographs and memorabilia from the darkest days of Guernsey history when the Germans occupied the island during World War II.

This story is well told of course, in the most famous movie ever made about Guernsey, the Guernsey Literary and Potato Peel and Society, which it seems, everyone but me has read and also seen the movie. Don’t worry, it’s on my list!

The walk continues past the massive concrete bunkers that line the beach at Vazon, where gigantic sea walls that now block the ocean were built to repel tanks and invading troops who never showed up.  The tour then jumps on a public bus for the short ride to the Imperial Hotel. Here the famous Wallow charcuterie is set on a platter and a sweet-potato pork pie awaits with a Gin and Tonic. And the Gin, Blue Bottle, comes from Guernsey!

It’s a lovely way to learn many tidbits of history about the war era and to learn about how craft farming works in 2018. Highly recommended!

Simon Dufty: A Hotelier’s Hotelier I Miss My Truck