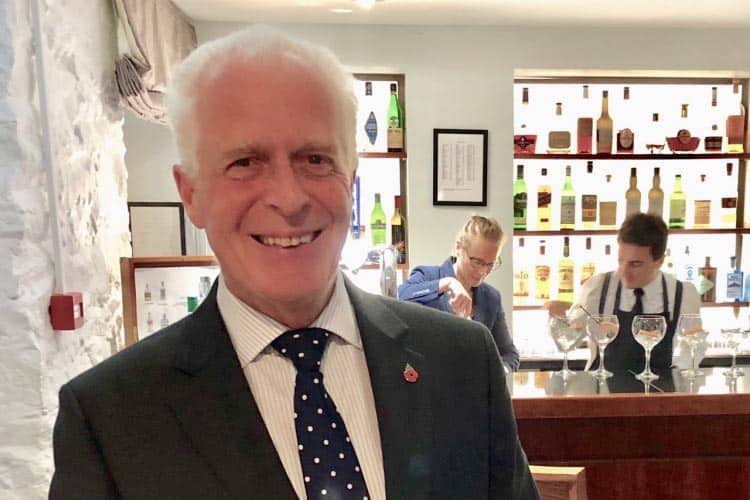 Simon Dufty looks the part of the perfect Englishman, except that no man from Jersey would ever call himself English.  For 40 years, this impeccable and unflappable gentleman has worked in the hospitality business, and today he manages the delightful Le Fregate Hotel in St Peter Port Guernsey.

On the weekends he flies or takes the ferry to Jersey, the larger island also in the Channel Islands. It’s a ten-minute flight or a one-hour ferry.  But in these rough waters, the ferry is often canceled, so the world’s shortest flight is often the only option, for a whopping 110 pounds.

The first thing I asked Simon was how he could live on Jersey when there is such a rivalry and difference between the two islands. It was described to me like two sisters who don’t get along.  Jersey has 12 flights each day, twice the population, and things that Guernseymen hate, like MacDonalds and high rise hotels.

Jersey was once full of Royalists, who supported the English King, while Guernsey was Cromwellian, Cavaliers who hated the royal rule. In the end, both islands became bailiwicks, not territories of the crown. Simon said his wife loves living in Jersey and he’s just fine with his weekly commute. I know it must add a bit of insulation from the pressures of his 24/7 job by being too far away to pop in on the weekends.

Simon spent three years in London at the Mayfair Hotel, but found city life too much–he happily returned to Jersey to run a restaurant for four years, which was a mixed experience.

He’s run Le Fregate for the past eight years and said that he’s happy here. And the trust who run the hotel is happy with him too.

The hotel’s occupancy dips down to as low as 20 percent during the winter months, but in the summer they’ll see 98 percent.

Much of the business comes from Guernsey’s many financial trust companies, which supplanted the lucrative fresh tomato business when the EU subsidies made Holland and Spanish tomatoes much cheaper. Today Guernsey is filled with empty and broken greenhouses.

You hear quite a bit about finance when discussing business on Guernsey. The island got whacked when the tomato business dried up, but got revenge by offering lower taxes for businesses incorporated here on Guernsey. Today it’s the most important business sector on the island.  Northern Trust is just one of hundreds of financial firms who have put roots down here.

Simon was about to take his 20-year-0ld son to the airport next week to begin a stint in the Royal Marines.  As we shared stories about our children, grandchildren, our mates, and our careers, I realized that it’s not often that I get to spend time with such a fascinating and distinguished man as he.

It was my pleasure to make his acquaintance.

Guernsey: A Delightful Bailiwick Well Worth Exploring Wallow Takes You to the Farm then to the Sea