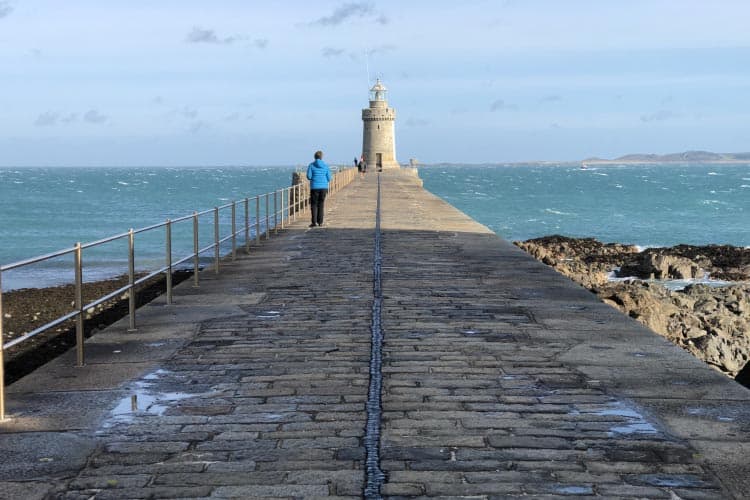 Last night I flew from Gatwick to the Bailiwick of Guernsey, and today I got a chance to tour a bunch of fun places on this 24-square mile island.  Though it’s only five miles long, Guernsey doesn’t feel small…there are many beaches that show off wide swaths of odd-looking rocks that get covered up when the 30-foot tides come in.

One of the island’s most interesting features is the World War II bunkers, five of which were built by slave laborers during the war.  A local man created a shrine using small shells to decorate the inside of one of the bunkers at Fort Hommet, that was recently restored after youth vandals destroyed his original creation back in the 1970s.

He wanted to pay tribute to those slave laborers.  Inside one of the bunkers, which was a searchlight station, written on the walls is “I want to go home,” in German. I can imagine those occupying Germans didn’t much enjoy being in the cramped quarters all day long.

As I toured the island’s many occupation sites, I heard sad stories of how the Germans didn’t let the locals go fishing, and if any of them were Jewish they were immediately deported.  Such harshness is in such contrast to the friendliness Guernseyites have now towards German tourists.

Guernsey is full of funny little facts and quirks. One perk that people pay dearly for is low number license plates.  This country is one of the only places that use solely numbers on license plates, no letters. The three-digit plates go for upwards of $25,000.  The head of the government, called the Bailiff, earns license plate #1.

The plate 007 was sold to the owner of an Aston Martin for $75,000. The government, which they call ‘The States’ here, decided to cash in by adding a zero in front of the very in-demand three-digit plate numbers, lowering the value but increasing their take.

This is a bailiwick of UK. It’s got its own government, its own unique paper, and metal money, and it has its own passports. You can’t spend Guernsey money in London, but you can spend English money in Guernsey.  It’s not a sovereign nation, it’s more like Barbados, Canada and Bermuda….related, but not controlled by England. It’s a wacky little island of about 62,000, spread out over a meager 5 miles wide.

Even though the little city center can be quickly jammed up with the 82,000 cars registered on Guernsey, you can drive past the thick granite walls that line many streets and find a sea vista down overlooking a cliff that will perk you up, and make it feel not crowded.

This isn’t an island that becomes overrun with tourists in the summer, most of the people live here year ’round. And there is a definite affinity here for being a “Guernseyman” that carries over to children, many of whom go to college off-Island and then return.

I met quite a few people here who said they knew people who moved away and returned, older people as well as young. There is just something about this small island that people love dearly.