Valley Bike Share: A New Way to Get Around 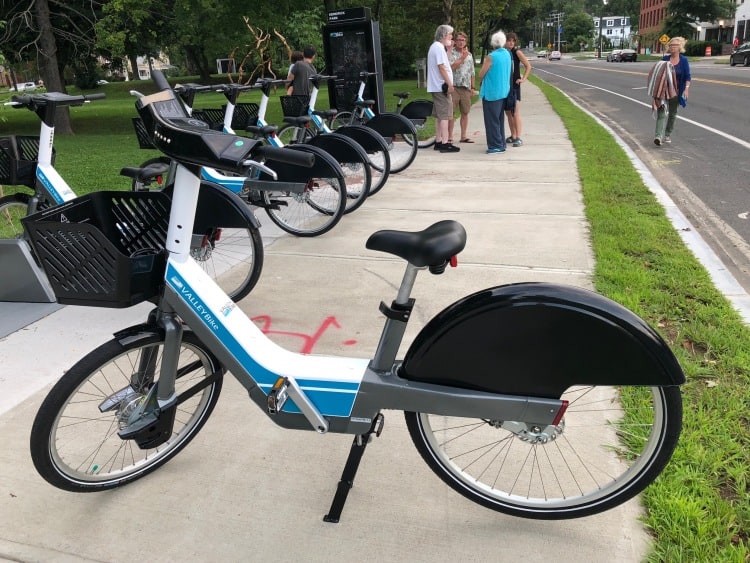 If you have noticed the shiny new bikes that sit in specially-designed stands in strategic locations around the Valley, you’re not alone. I was thrilled when I heard about these new bikes and entered a raffle at the Northampton street fair a month ago. I won a year’s pass and a cool tee shirt!

A few nights ago, I went down to Amherst to hear Colorway play at Kendrick Park, where a Valley Bike Share rack sits.  I took out my iphone, typed the number of the bike into the device, and unlocked it.  I had it for 60 minutes, based on a digital clock on the bike’s dashboard.  The dashboard gives you speed, 11 mph, distance ridden and that timer that starts winding down as soon as you set off.

Although these are electric bikes, it’s really ‘electric assist’ because you don’t get any assistance if you’re not pedalling. So you pedal and are rewarded by a little zip, and it’s best when you’re riding up a hill. Then that boost really comes in handy.

I’ve ridden many different electric bicycles, both in France, in Ireland, and in Austria and every one was faster and better than this one.  Perhaps since they are public they have put in governors to keep the powered speed to 11 mph.

Usually, if you own one of these, you can select different modes, like on the Austrian mountain bikes include ‘Turbo.’  This is far faster and zoomy than these rentals.

So I was trying to visualize how I would use these for a long ride, say, to Holyoke. That would take a lot of work, again since you would have to pedal the whole 20 miles and there are few downhills. 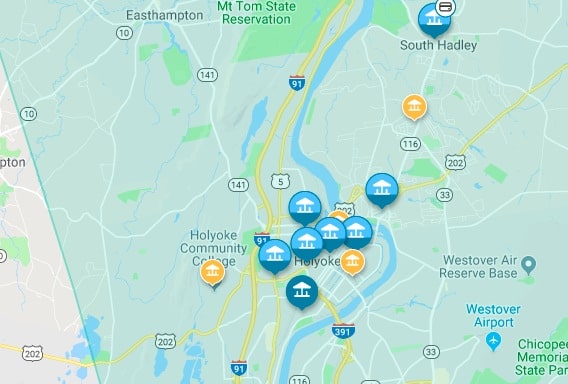 Nine more docking stations are planned, including five at UMass and others at more distant points.  I wish we could get them to put a docking station in South Deerfield, but I guess UMass is a more likely place to find users for the service.

It costs $90 for a yearly pass. This gives you the chance to borrow the bikes for 60 minutes at a time, but if you dock the bike again, you can start the 60 minutes over again.  If you stay on the bike longer than 60 minutes, it costs $2 for every additional half hour.

Clearly these rates are designed for short term use, and not to compete with any commercial bike rental, when you’d have the bike for a whole day. But there is no where you can rent an electric bike like this, and the problem with these expensive bikes is that you can’t really ride this with a non-electric partner. You’d just be leaving them in the dust on every hill.