Jeff Noyes is a man with a dream. A shucker’s dream.  He is happy to say that he is doing exactly what he wants to do in life. After 15 years heading up his hometown’s oyster festival, he’s created an oyster tasting room and bar, in Tyne Valley, PEI.

We visited Noyes and his partner, Damien Enman, who have been working on their new oyster tasting room at Valley Pearl Oysters above their processing plant.

Jeff showed us a $150,000 machine that sorts the bivalves by weight and size.  I asked him about the $1 oysters offered at a popular Charlottetown watering hole. “They would sell the stuff that we reject,” he said, “see how it’s got some worm in the shell? That’s fungus, and that’s why it’s a buck. That makes the shell softer and so it chips off and it gets into the meat.”

Jeff and a team of fellow shuckers won a Guinness Book of World Records trophy a few years ago for the most oysters shucked in one hour, a whopping 8,000 of them, which were all fried up and sold at the festival.

The plaque sits up on a shelf, with a few other trophies proving their shucking prowess.

Jeff’s oysters come from Malpeque, the bay where Tyne Valley is located. Unlike other oyster producers, these oysters are not farmed in rows with baskets, instead, they are harvested from the bottom, scraped up from the seabed with a long-handled set of tongs. Though like other oyster operations, these are seeded, they grow much larger sitting on the bottom instead of in the rubber bags used by other oyster farms.

These entrepreneurs almost didn’t get their business license, after a clueless bureaucrat in Charlottetown said that ‘oysters weren’t an appropriate use in Tyne Valley.’   Jeff got his neighbors and friends to chime in since Tyne Valley IS all about oysters– it’s the home of the big annual oyster festival.  The decision was quickly overturned and the building began. The pair said they’ll be open for oyster tasting with local craft beer on tap later this summer. 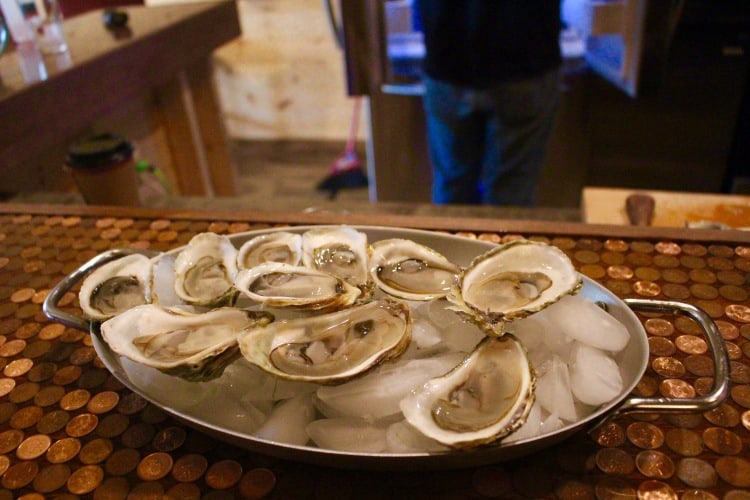