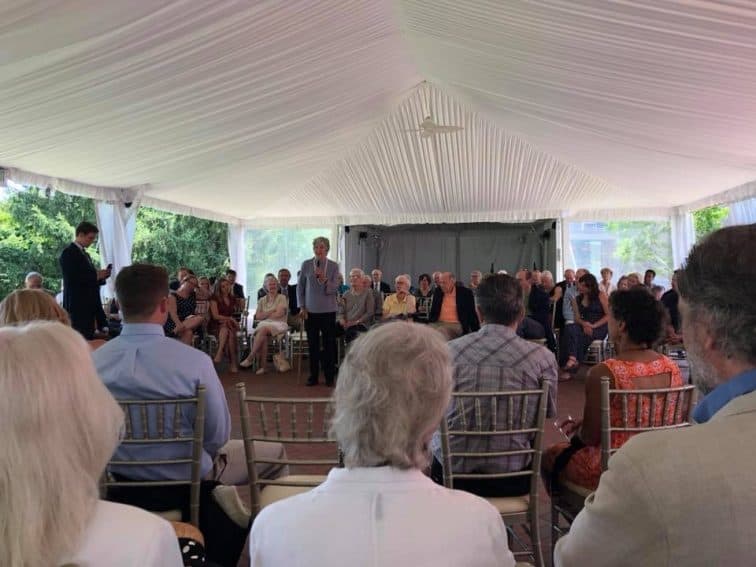 The main reason we agonized over so many of the details was that my dad was a planner. He had specified just what he wanted, from the music to the people who would speak, and we wanted to get it right.  One of the first things we realized was that his hope to have it at the Unitarian Church wasn’t going to work, due to construction. So we picked the Chauncey Conference Center at his old employer, ETS, and we were off and running.

We invited many, many people, and that’s one of the points that many of the speakers made–Nat and Val were very loyal friends, and they kept in touch with everyone. So there were many people their age as well as legions of cousins, godsons, neighbors, and relatives who came from far away, like Val’s cousin from Texas.

I was the at the podium, in charge of the music, and despite a few gaffes, I got good marks on my tribute and for being up there.  We passed around a wireless microphone and we heard from nearly every young cousin and from dozens of other friends and relatives.

A dominant theme was the way Bumpy could make just about anyone feel smart, and like what they said was so valuable that it made them feel good. He made everyone feel good, and he was the world’s best listener, explainer and mostly, he felt for you. You really felt heard.  He helped teach my nephew James to read, and he steered a famous novelist named Peter Heller into his chosen career.

It was wonderful to be in the company of so many family members, who sadly, it’s rare to see in the same place. But I knew that many, many friends would show up for this, and I was pleased to include my old friend Joe O’Rourke in the crowd.  Even the program for the event took a lot of time, we wanted to get it just right.

Like the words on the back of the program, that simply summed up the way he was….