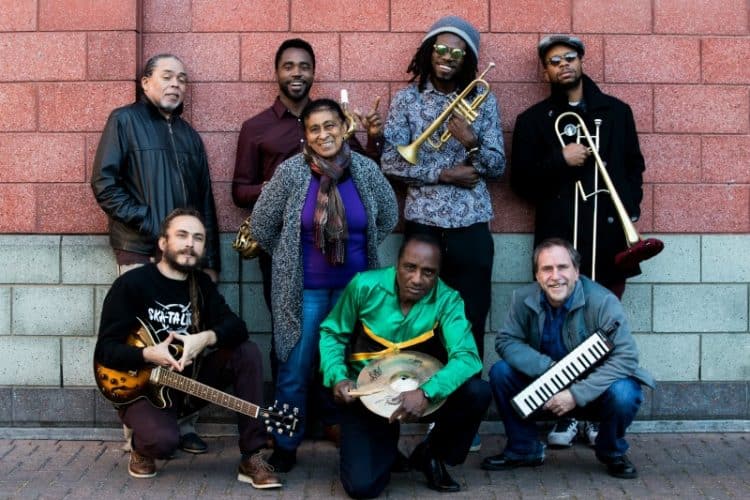 It’s not that often you can see a legendary band like this, and in the intimate confines of Hawks and Reed, it’s especially fun. I am sure there will be plenty of room for dancing, unlike at some of the more crowded Northampton venues.  Listen to the catchy beat and perfectly timed trumpets, these guys have it going on and it will be a great night for dancing.  Tickets just $20 in advance, buy them and save $5 over the door price.

These Skatalites have backed Bob Marley, Peter Tosh, and Toots and the Maytals, going back to the 1960s. But the institution of the Skatalites is a constantly changing one, with ten of the original players passing away, some dropping out and new members coming in. It’s not the same players as the original band, that lasted only briefly in the mid-sixties, but now it’s more the type of music and keeping the traditional ska alive.

The line-up on this tour is

The band’s biggest hit was the instrumental “Guns of Navarone,” from their heydey in 1964.  In August 2016 the band released the album Platinum Ska and toured through the USA, Hong Kong, Japan, Mexico, France Italy and the UK.

Friday’s show starts with Green Island, a local ensemble of all-star musicians who play “Coltrane to Ranglin, Marley to Marvin, ballads to Banghra.”