Extravaganja has been around for 27 years. It started on the Amherst Town Common, and two years ago, they outgrew the space and now it’s held every April 20, or so, at the Tri-County Fairgrounds.

I had never been to the fest before, so yesterday my curiosity got the best of me, so I joined the crowd of younger people and queued up at the gates. A group of four African American men gave up when it was announced they’d have to produce ID, and a strict policy of bringing nothing except sealed water bottles forced me to dump mine.

As I walked by the many stands and circles of smokers, I was impressed by two things. One, the diversity of the people who were there.

Much more black, Hispanic and Asian people than one usually sees in Northampton, or overall in the Valley.  The other thing was evident was an age gap between me and the rest of the 12,0000 strong crowd.

I walked around the crowd and felt out of place, for only the vendors were close to my age, most were much younger. Not a deal breaker, but noticeable. 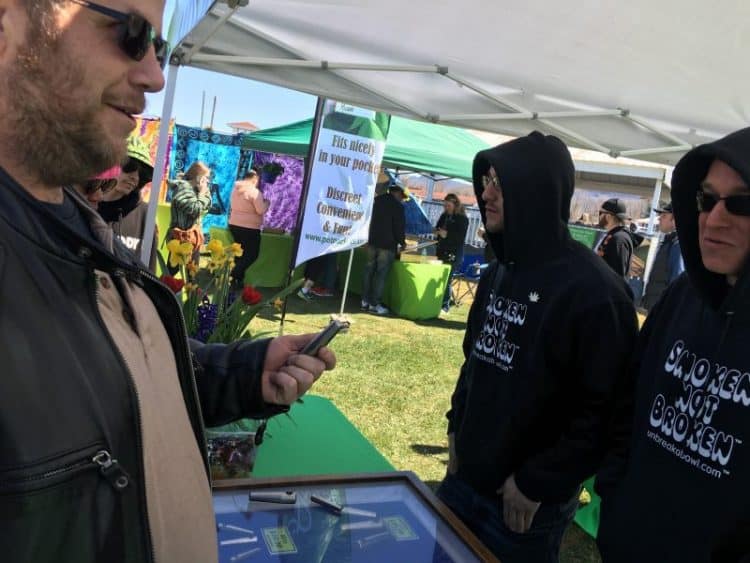 As I continued past row upon row of glass pipes, bongs and growing gear I came to a stand without any pipes just a sign that said ‘Donations.’  Here is where I would actually be able to buy some well-cultivated weed, by donating to the cause, keeping to the price tag. A bud of a nice size was ten bucks. Legal. A gift.

Down at another booth, they had free dabs. This is where pot smokers are heading, they love their dab rigs and special torches.  A little sheet of what resembles melted plastic is the dab, and you could get one if you bought something at the stand.  Legend has it that this one little puff is 32 times more powerful than a normal toke. So they don’t need much!

Soon the stores will open and all of these products will be available. My partners and I are applying for a license for Positronic Farms, soon we will be joining the melee by growing recreational weed. It’s a whole new world.