Beyond Burger: The Secret to the Taste is the Heme

I’ve been talking up a new product I found at Whole Foods, that I had read about perhaps two years ago in Wired Magazine. It’s a new hamburger made from plants that truly tastes exactly like a regular beef hamburger. It’s incredible, you expect it to taste the way most veggie burgers do…but then it doesn’t.

Beyond the Impossible Burger, paired with pesto pasta.

On a recent vacation in Westport, MA, my family went all-in on the Impossible Burger. My sister Caroline gave us a choice, turkey burgers or Impossible burgers.

Most of us chose the impossible, and we all loved them. What is it?  I just like that they taste like a burger, even with that little red ‘beet’ blood.

And the crunch, I like the surface of the burger that’s slightly hard, like you have to bite down into it when it’s cooked on the grill.  All around, I think the future is in these burgers as we stop using so much water and grain to feed cows.

The Beyond Burger is a breakthrough, as Wired’s writers said, it’s the impossible burger. Because how can this taste like a burger if it’s not meat? 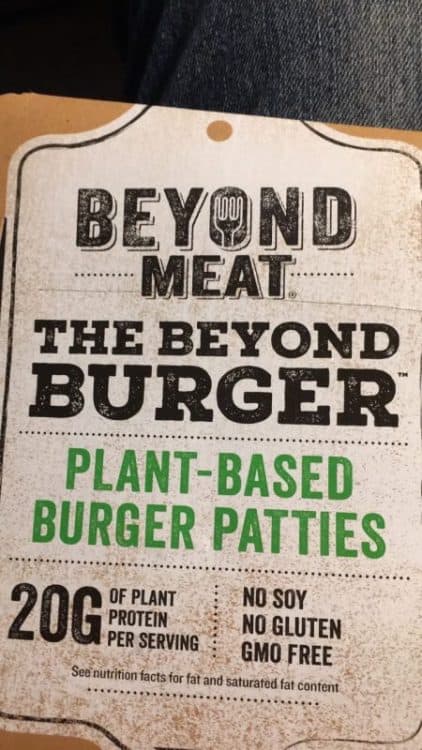 The secret, the article states, is heme.  “What makes a burger a burger? The smell, for one, and taste and texture, all working in concert to create something animal. It’s loaded with all manner of proteins that interact with each other in unique ways, creating a puzzle of sorts.

Beyond Burgers and Heme

But Impossible Foods thinks the essence of meat lies in a compound called heme, which gives ground beef its color and vaguely metallic taste–thanks to iron in the heme molecule. In blood, heme lives in a protein called hemoglobin; in muscle, it’s in myoglobin.”

I have bought the burgers twice, they were on special at Whole Foods for $5.00 for two, about the same price (or less) than what Mary spends on the grass-fed, organic hamburgers she buys each week from the same store. I was at the store recently and as a fellow shopper was taking out a different kind of fake burger, I told her about Beyond.

“These are amazing, they taste remarkably like beef,” I said. She decided to give it a shot, hey, it was on special!

Here are some questions from the Beyond Meat website:

WHAT KIND OF PROTEIN DO YOU USE?

The primary source of protein in The Beyond Burger™ comes from peas. It’s soy, gluten and GMO free.

HANG ON…IF THIS ISN’T BEEF, WHY ARE THE BURGERS RED?

Well, we used beets to do that! Amazing, right! We wanted to keep the whole experience of cooking burger as similar as possible for our flexitarian fans, so we’ve worked very hard to create a burger that changes color as you cook it just like animal protein.

WHY DOES THE BEYOND BURGER™ “BLEED”?

While we didn’t design The Beyond Burger™ to “bleed” per se, the beets we use to give the patty a red-meat appearance have led some in the media to remark that the burger “bleeds” beet blood.

So now, go out and try one of these, and leave me a comment about what YOU think it tastes like.

Read a review of many of the top imitation burgers here.