On the Island of Ilovik, a Seafood Feast Worthy of Poseidon 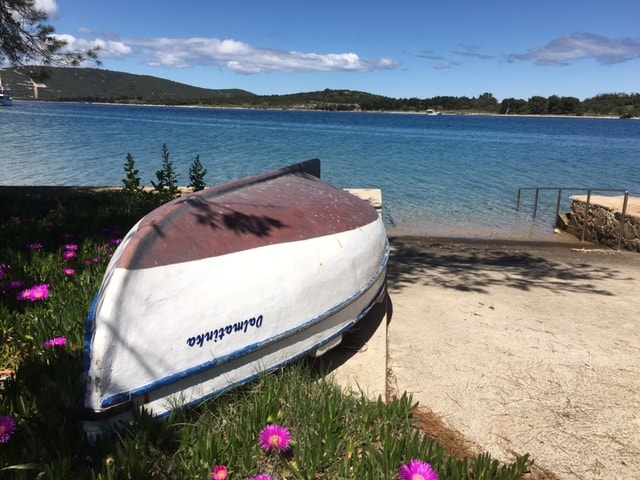 Croatia is famous for sailing. With more than 2000 islands off its coast, this is a place that is full of yachts and sailboats with a thousand years of nautical heritage. Today we climbed aboard a 42′ sailboat owned by the Jadranka Corp, owners of the Hotel Bellevue, and explored coves and the coast in Cikat Bay to the small island of Ilovik.

With less than 80 residents, Ilovik is a small island of just six square miles, and most of the nearly 400 houses are only occupied during the summer.  We walked through the mostly deserted town, where boats were being painted and sanded down in preparation for the sailing season ahead. I can imagine what this small island becomes when hoards of visitors descend on it, and thought about crowds sitting in the benches outside the gelato shop which now were empty.

We had another first-class lunch ahead of us at the wonderful Dalmatinka restaurant, where we learned that they actually own their own fishing boat and catch what’s on the menu. It was a feast worthy of Poseidon, starting with the pictured seafood antipasto, with a tuna spread and anchovies that everyone devoured on their home-baked bread.  A giant turbot was brought out with the chef igniting it with a flourish before removing the meat from the bones and presenting it baked with potatoes and peppers.

With a risotto as a second course, the feast was a perfect slice of what makes Croatia such a memorable destination. Now if I can only fit into these pants, I’ll make it to a late dinner at a small local restaurant!

Croatia, Where Have You Been All My Life? Apoxyomenos Stands in a New Museum in Mali Losinj