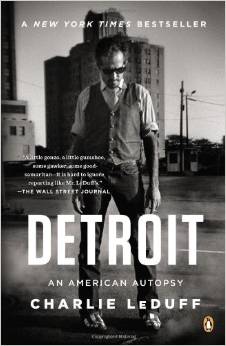 I picked up a book at Horizon Books in Traverse City. I was amazed to see that this bookstore cafe is open from 7 am til 11 pm Seven Days a Week. Wow!  The book is about a city four and a half hours south, Detroit. And it’s clear from reading just the first few pages it’s a far far different mindset and attitude down there than idyllic Traverse City.  It’s called “Detroit An American Autopsy”  and Charlie LeDuff pulls no punches.  He once was a reporter for the New York Times, and he decided to move back to the his hardscrabble home town with his young family.

Here is how he describes life in a screw factory, a dead-end down on your luck job that his brother had to take after he was downsized by Quicken loan. There were once 200 loan officers, but after the 2008 crash, there were just 28 left.

“Walk in the door of the screw factory and the first thing you notice is the enemy–the time clock. Then you notice the stink of oil vapors and solvents. The dispiriting yellow light. The slippery floors. The caked and peeling walls .

The workers don’t want to be here. The liquor bottles in the weedy lot out back  told part of the story.

I watch the poor mopes taking the last dregs of their cigarettes before the work bell rings . The cutting fluid and other oils have permanently stained the skin under their nails. And that damn lousy smell stays with them.

I couldn’t take my eyes off their bad skin, made worse by grinding dust and dirt caked in their ear folds, eye corners, noses and  hair. I see their skin pockmarked from the metal shavings that they probably have their wife pull out with tweezers each night while they drink  a can of beer. I used to work in a place like this as a kid.  Almost everybody who grew up here spent at least some time in a factory like this.  I remembered it all as I watched the hollow, cornered faces staring at the time clock like they wanted to smash its teeth out. I remembered it all in five seconds.”

Sarah Landry Ryder: Keeping It Moving At The Redheads MeetUps Bring People Together for All Sorts of Great Reasons