Dorie and John Belisle’s Bellewood Acres: Doing Everything with Apples 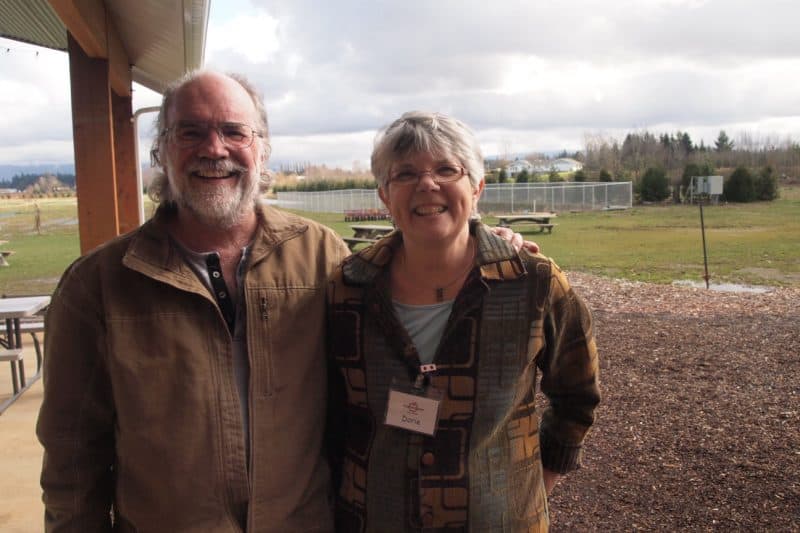 From the top of her deck, Dorie Belisle showed me the sweep of farms and the array of crops that this part of Washington raises…to the left, a herd of holstein milking cows, then blueberry and raspberry bushes, then pumpkins, potatoes, apples, and on and on. We were touring the farm  and businesses she and her husband John have developed called Bellewood Acres.  From humble beginnings as a dairy farm, now the couple distills fine gin, vodka, eau de vie and whiskey, grows 25,000 carefully tended apple trees in neat rows that look like grape vineyards, and has built a huge business offering products most of which come from their special honey crisp apples.

I asked Dorie how they figured out the complex science of distilling booze from their apples. “We took courses, we studied–we love doing new things, most of what we do starts from something John or I wrote down on a napkin and goes from there.”  They’re confident and they are showing the way for how to maximize the revenues from farm products, by offering added value and selling direct to the consumer.  Their apples are in nearly all of the local school districts, and their products like apple syrup, boiled down like its maple cousin to just the essence of the fruit, and apple cider all sell out after the crop is harvested.

It’s hard work and not for most American workers, however. “People like to pick apples for four hours, or on Tuesday afternoon,” Dorie said. But when the crop is in, it’s a few weeks of very hard work. They rely on a core of year-round workers plus a small influx of about twenty immigrants who can work on many other crops as they ripen, keeping them employed for longer. “Labor is scary in agriculture, some of the other farms have to have 600 workers just when the raspberries or strawberries are ripe. That’s a real challenge.”

I asked Dorie what she would do after she and John decide they’ve had enough. They’re both in their 60s. Their four children are successful in their own non-farm careers, so a few years ago they began cultivating a succession with a young couple to take over. “But we don’t want to throw too much at them,” Dorie said. “Just a little by little so they can take it all in and not get overwhelmed.”

In Minneapolis, I Saw the Future of Airport Restaurant Dining Haunted Fairhaven: Meeting Orbs and Learning about the Ghosts