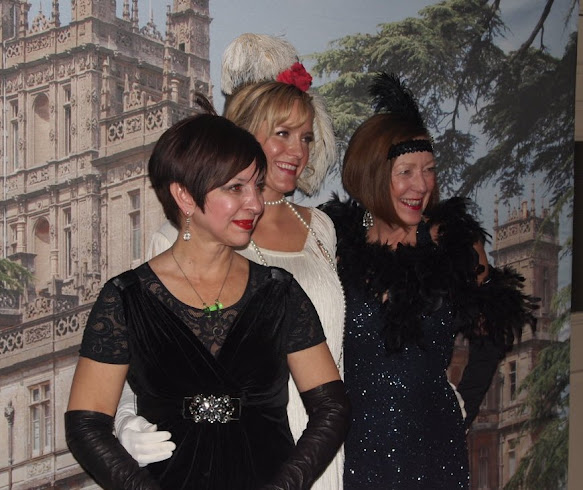 View a photo gallery from the
Masterpiece Ball 2014

I think in a laid back place like the Pioneer Valley there remains an intrinsic desire to get dressed up once in a while. Enough of the pajamas on Main Street, and the casual Fridays every day.

We gravitate toward any chance to get into our fancy outfits, and that’s why I think Saturday’s Masterpiece Ball Celebrating Downton Abbey was such a sold-out success.

Every ticket was sold and everyone was dressed to the nines as we swept into the Log Cabin, where the dining room and cocktail areas were decorated with fresh flowers and lots of candles.

The strains from the theme from Downton Abbey, an ethereal piece of music presaging drama and mystery to come, could be heard in the hours before the big band began to play early 1900s tunes to the enthusiastic audience of dancers.

Women were wearing feathery fascinators and hats, men were decked out in tuxedoes and some with the white ties worn by Downton Abbey butler Mr. Carson and the evil Thomas the former footman. Everyone was in a good mood as they had their photos taken and they enjoyed the sumptuous period banquet of roast lamb, filet mignon, chicken smothered with onions and a pretty mashed pea timbale.

We had a quiz of Downton Abbey trivia put on by Monte Belmonte and after a little more dancing, we got a chance to see the first hour of the third year of the series, which hasn’t yet been broadcast on television. A festive and fun night for all!

Jamaica is a Delightful Place for a Winter Getaway Argentina Says We Won’t Pay, And Leaves the Presidential Plane at Home