Oystermen We Have Known and Memories of Oyster Moments

It’s officially oyster season and with this in mind, I read a story by Sarah Karnasiewicz in the WSJ with particular relish. What is more seafood-y than a nearly liquid oyster, that you suck down and then smack your lips after consuming?  I have had many memorable oyster moments while on travel writing trips, one was on the coast of Normandy in 2009 when Paul Shoul and I got up and decided to have them for breakfast at a seaside village called Carteret.  Outside of the restaurant was a picture of a mollusk and a sign that said HUITRES. We sat at a sunny table and slurped down six apiece, with a beer way too early in the day. I can’t remember any seafood ever tasting better. 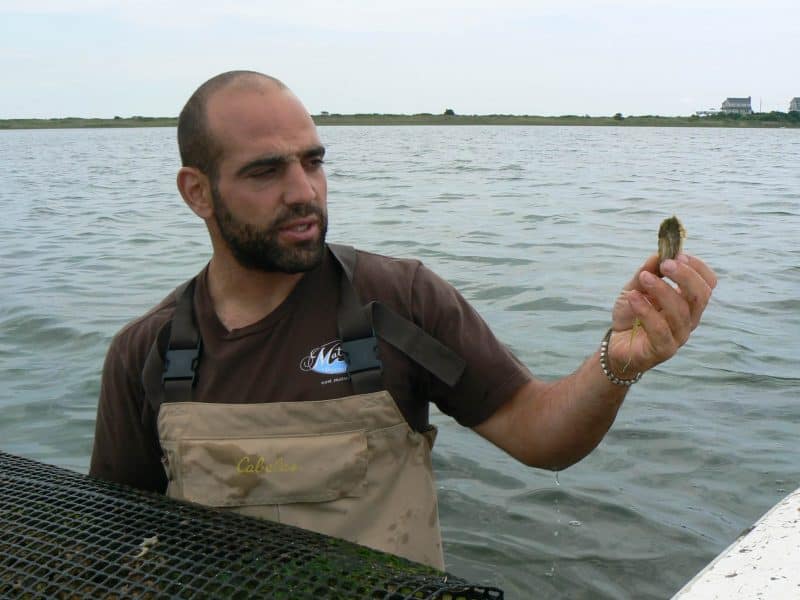 Oysters are like a distillation of seafood tastes, concentrated into a briny liquid slurp that you either love or you hate. There is really no middle ground when it comes to eating raw oysters. There is good news for oyster lovers, the article said. Around 1930, overfishing led to huge price spikes and then in the ’80s, it was hard to find them in seafood-hot cities like Seattle. Cooks would wash and reuse shells filled from a jar.  Today there has been a resurgence in growing oysters, over the past five years the number has grown from 5 to 23 million.  It’s all about merroir today, the equivalent of terroir, but marking specific areas of the seacoast with certain properties that affect the taste.

Paul and I met an oysterman in Matunuck, Rhode Island and he took us out in his little outboard to see where he grows thousands of oysters a year in Potter’s Pond.  After we watched how he puts them in metal trays in the water we returned to the Matunuck Oyster Bar for an oyster feast, many of them were of the smaller variety that is his specialty. I am hoping that Perry’s restaurant and oyster beds are ok after the hurricane, the pond is pretty sheltered so I am hoping all is well.

The last oysterman I met was named Shaun Krijnen, and last fall he showed me around  his  oyster farm on the north coast of Wales.  He said that the demand for his product is so great that he doesn’t bother with mussels any more,  he sticks to growing these big Welsh oysters. Some,  he said as he showed us a pile of newly harvested oysters, were actually too big. But I love nothing more than a giant raw oyster to me it’s just much more of a very good thing.

In Anglesey, Wales, the waters are strictly controlled so that there is no run-off or other pollution. Nearby a company harvests salt, they too benefit from the tough environmental controls that favor food producers over commercial operations that might foul the waters.

It was terrible when the BP oil spill wiped out more than half of Louisiana’s oyster harvest; this combined with Katrina and Ike had a terrible toll on the vulnerable wild reefs.

Today a man named Rowan Jacobsen catalogs the many different oysters by location, and on his website, the Oyster Guide, he provides detailed descriptions of the various appellations of this new science of merroir.

Step Up to the Cider Saloon, and Taste them All! Do a Double Take This Weekend in Greenfield