In Molokai, I Got an Appreciation for Cafes and Commerce 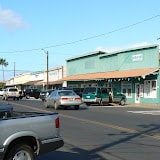 I drove up to the gym with the back of my truck loaded up with large cans of beans, tubs of mayonnaise and dressing, and a bunch of other foodstuffs that were a leftover legacy of the former GoNOMAD Café. I was heading for the Salvation Army, where I found an appreciative large woman eager to say thanks and happy to review my loot. They always have mouths to feed, so it felt good donating to them.

I drove away and stopped by a small café, called Siren. As I entered and got a coffee to go, I thought about last week, when I was on the island of Molokai in Hawai’i. At about this same time last week I had left my hotel and ventured into the town of Kaunakakai, looking to spend some time with the locals in a café like this. No dice. Storefront after storefront in the one small commercial area turned out to be convenience stores, small groceries, laundromats, but the only place resembling a bakery café had a sign saying it was closed Tuesdays. The number of cafes in a town to me signifies how vital and how alive the place is. In this case, Molokai is quite dead.

I will be writing about this soon, and was amazed to find that there is only one hotel and one full service restaurant on the whole island, serving the 7800 citizens who live there. Sometimes I take our tidy streets and prosperous local businesses for granted, but I bet the people who live in Molokai would love to have just a few of the many cafes and small restaurants we have here. It’s tough making a go on an island where you’re dependent on poor locals and everything is imported by barge, ferry or plane.

Now when I stop at a little café, I say thank you to myself, along with the barista, for them being open and not facing a dearth of commerce as the people of Molokai have to. Though most of them would live nowhere else, I am pleased to reside where I do, in old New England, and visit the rest of the world once in a while.

The Arts & Industry Building Shows the Creativity Within Earning $200K a Year, Miners Happily Blow it All in Perth Australia