He Hustles Hard, He Sings Sweetly…He’s Lenny, from Greenfield 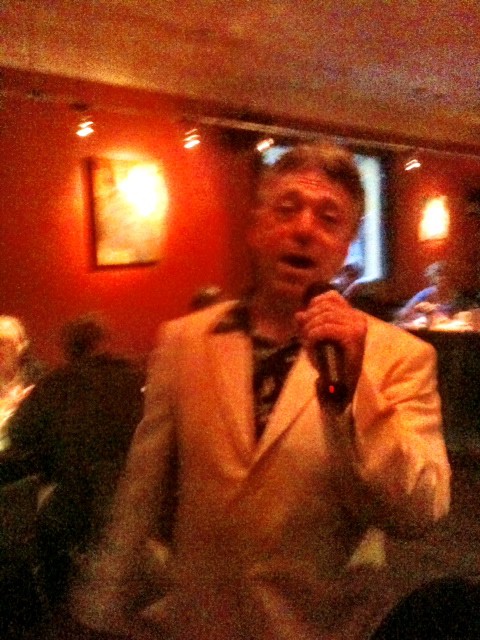 Lenny singing Sinatra at the Voo.

Lenny Zarcone loves to sing. Right in front of you, right at you, he swoops in with his microphone in one hand, the other arm stretched out, and he sings, sweetly, in tune, right into the faces of his audience. He meets your eye, he keeps on singing, and the songs are the kind of songs I love. The good songs, the songs with the tender words, the songs made famous by Sinatra, and Como, and the Beatles. He sings them well, and he’s unabashed, but sometimes, forgive him, he forgets the words, and uses an ipod as a tiny TelePrompTer. Hey, he’s human. He’s Lenny. He’s from Greenfield.

When I saw the Voo’s Facebook notice that Lenny was singing, I knew I wanted to join him. I’ve known him for a while, back when he peddled ads for the local paper and I ran the cafe. He’s got a show he calls “singing the great old songs from the Frank Sinatra Songbook and more!” and he’s not doing karaoke.  No, his voice is better than that.  It’s schtick, but those songs, the songs are so good and sometimes if you close your eyes, yes, he really does sound like Perry Como.

But it’s not easy being a crooner in the day of Lady Gaga.  He hustles hard, and sometimes doesn’t get invited back. He’s impulsive, he’s over-reaching, sometimes he grabs a drink from behind the bar. He’s familiar, he’s friendly…he’s Lenny. And he just loves that stage.  I asked a good friend of his sitting at the bar if he’s tried to get booked down at Foxwoods. Those high rollers would love this stuff. “They’ve got a whole room full of people like him,” was the answer. I guess if you do Sinatra, that’s the door you’re gonna be knocking on.

A table of women got a big kick out of his show. They sang the words, and had a blast when he sang Neil Diamond’s “Sweet Caroline,”  arms waving above their heads.  Smiles all around. Fun.  He does songs that we all remember, songs like ” The Way She Looks Tonight,” songs that bring back a gentleness, of love lost, and sadness,  an easy peaceful feeling that too often is lost in today’s music.

After the show we sat for a while and then the next band got ready to play. After a few loud drum beats and some undecipherable lyrics, I didn’t want to hear any more. I wanted Lenny’s sweet croon back again.

How Big a Bottle Do You Need to Celebrate a World Championship? Solid Sound Brings Culture, Music, Excitement, Wilco and Bucks to No. Adams