New Zealand Is Ready for Travelers: Some of My Best Memories

This week an effort is commencing to help the economy of a country devasted by an earthquake. No, not Japan–New Zealand–which was hit by a huge quake in Christchurch a few weeks before and now their tourism-driven economy is taking a big hit. #Blog4NZ is the name of this effort, and herewith are just a few of my favorite memories of traveling down in Kiwiland–which honestly, is my answer when people ask me, “what is your favorite place to visit in the whole world?”

Below are several vingettes of travel experiences in New Zealand that capture why it’s such a special place and why even after the world’s longest plane trip, I still hold the place in my pantheon of important places.

CRUISING DOUBTFUL SOUND: We joined ten other people in an all-steel boat and headed into the Doubtful Sound, in Fjordlands National Park on the lower part of the South Island.

To get to where the boat leaves, we drove far, far south across fields dotted with cows, sheep and deer, and then boarded a ferryboat for a 45-minute crossing. Then we were ready to enter the huge sound…so far away from everything, it was simultaneously spooky and thrilling.

In our first hour, Captain John hauled up his lobster pots, and made a lunch on the deck of the tails, boiled, cracked and dipped in butter. Later that evening, we made our way outside of the sound into the ocean, and cast lines in from the back deck. Soon we were hauling in cod and other fish that would make a perfect sashimi.

We were virtually alone there, in that huge sound, just us in the 12-person boat and the great outdoors. It was magical experiencing such total and absolute silence, and looking around to think that there was nobody within at least 100 miles except us. 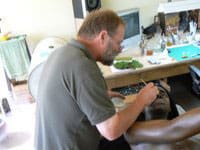 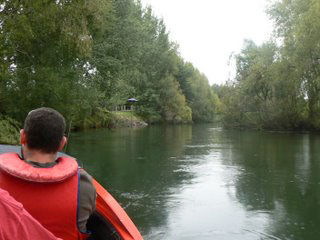 Another extra special New Zealand moment came aboard a jetboat….on the North island we met a man named Geoff who offers 4×4 adventures and jetboat excursions up his creek at Longview Park. Here is how I described it after my 2006 trip.

But the most fantastic part of this adrenaline filled seven-mile trip was when we reached rapids and rocks too steep for the throaty boat to negotiate.

Then Geoff turned off the rumbling, bubbling motor. Silence engulfed us as we drifted downstream….a glorious, heavenly silence and the only sound was the gurgling clear water, and the cicadas that chirped unseen in the green above us.

Nobody spoke, nobody wanted to wreck this delicious quiet, nobody interrupted the cicadas and the rushing water except a few birds. We drifted down a bit further, Geoff gave us a little more of the silence as we drank in the lush tropical beauty of this rainforest that bordered this clean free-flowing river. Then he turned the motor back on and we roared back down the curvy path that we had come up.