A Blend of ’60s Kitsch and 00’s Movies: Disneyland Fascinates 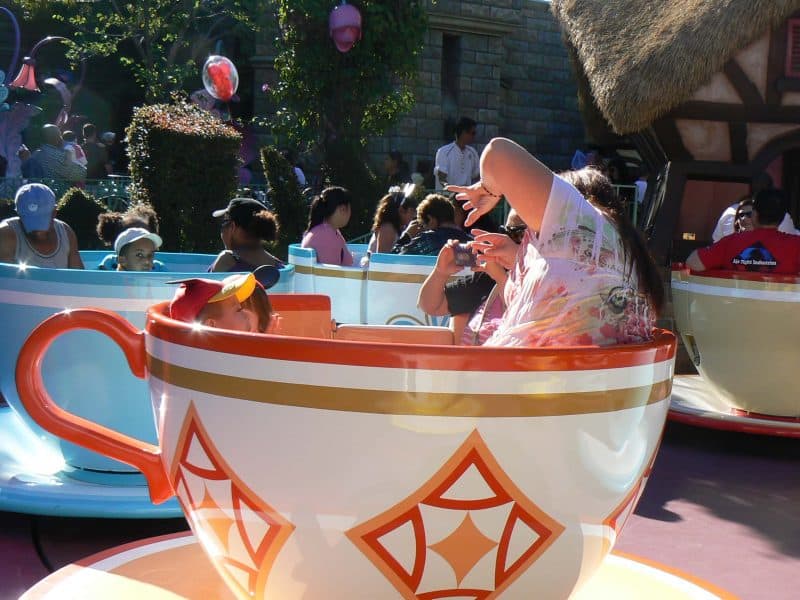 Disneyland is  the magnet that draws grandparents, parents and their kids to Anaheim, south of Los Angeles.  We visited the park today, and my two hosts were stunned to see so few people lined up to get in. “It’s never this uncrowded,” they said, both amazed that we were able to walk in and get into some of the rides with waits of just five or ten minutes.  For the really popular rides like Space Mountain, we used the Fast Pass, where you get a card that lets you in at a certain time with no wait, if you come back at the appointed hour. Still, it wasn’t the crush of humanity that I’ve heard can exist here. Great timing!

First I had to do the teacups. It’s the one thing I knew or could recall ever seeing in a photo of the park. So we joined families with kids and took our turn spinning ourself around with a bunch of other teacups.  Then I took another trip down memory lane–aboard a little boat in a dark and fascinating chamber.

“It’s a Small World” took us into a landscape populated by animatronic grinning kids, in different rooms representing the whole world.  They nod repetitively, and that catchy, smarmy song keeps playing, reminding us in so many languages that we’re all in this small world together. The different countries each get a turn, in corny, cliched symbols and the palm trees wave and more little kids in foreigner’s costumes wave to us as we pass by in our boats. I have a vivid memory of seeing this same attraction at the 1964  New York World’s Fair. That song stuck with me and I hadn’t thought about it until this afternoon at Disneyland.  God I’m old!

Tomorrowland featured a Honda hydrogen powered car, and rooms full of clever inventions like cool to the touch induction cooking surfaces and a counter that doubles as a computer monitor where you can call up recipes by voice command…and turn off the water (as long as you say please).

Stroller parking is key in a place where every other person is a wide-eyed kid.  As a fifty-something adult, the attractions made me think of my grandkids and how much they would enjoy seeing these familiar icons of pop culture playing a part in amusement park rides. We shot laser guns with Buzz Lightyear, and took a ride in a submarine following the sounds and animation of Finding Nemo.

In one of the strangest attractions, we watched MIchael Jackson circa 1986 in a 3D movie called Captain Eo.  Today’s kids who’ve seen the incredible Avatar and the many other more modern renditions of 3D movies might scoff a little at watching creatures that look like Alf and Sir Jackson himself decked up in a pseudo captain’s uniform.  And of course, when he bursts out in song, trying to convince the evil creature with the sharp dagger fingernails (who morphs into Angelica Houston) that he’s out to help her, not threaten her, it feels like a very expensive 1980s MTV video.

But I liked the music and the infectious beat and it was fun, like so much of Disneyland, to see this blending of kitsch and modern day Disney movies.  And since I’ve not spent much time in a 3D theater before, I was amazed even by 27-year-old technology that shoots asteroids into the audience that appear so close you want to reach out and touch them.

If You Wanted to Open a Bakery in Egypt, It Would Take 500 Days Downtown’s Disney’s Pedestrian-only Zone: How About in Northampton?