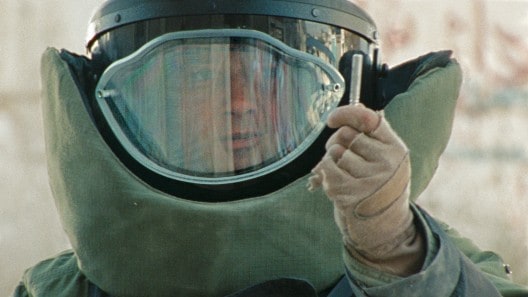 A film about bomb defusers in Iraq would at first glance appear  to be an action film; indeed, a trailer for another Iraq movie called Brothers at War was just that…exploding Humvees and violent action.

But last night’s cinematic triumph, The Hurt Locker, was more about how people relate to each other in situations of great strife.  It was about a character named James, a tough southerner played by Jeremy Renner, who comes to the field with the bravado of an idiot.   Later the men see how hard they all can take a punch after being liquored up, it’s a bonding moment in spite of its brutality.

James doesn’t shuffle the way the other bomb guys do when the dons the suit, a giant padded get-up with a spaceman’s face shield. No, he struts, almost running toward the danger of the bomb in the road.  He is fearless and stupid at the same time. He earns a punch on the face when he throws down his radio headset, which leaves the others in the dark about what he’s doing.

But the point of this triumph of a movie is how these men mold into bonded brothers, and how no matter how much bravado a young soldier might show, in the end, this is a terrible and scary place.  We follow the southern Sergeant as he tries to find the reason a young boy has been made into a human bomb…only to  find the boy alive later.  You don’t know who to trust, and a man talking into a cellphone during a defusing might be detonating it, or might be just talking into the phone.

It’s paranoia and it’s mayhem, and every day there is a new gruesome situation that nobody but the bomb guys are willing to tackle. We see the Marines huddled behind a wall; waiting for these heroes with the robot and the suit to untangle the wires of the car bomb.

There is no resolution to the madness of people willing to detonate themselves, or any explaining why someone would padlock explosives to man who pleads, ‘I have four kids.’  No, it’s just today’s awful reality of war, in all its painful detail.

Use Gas as the Entree, not the Appetizer We Surf the Internet, We Swim in Magazines, Say New Ads