We flew over to Santa Maria to continue our discovery of these nine Azores.  We came upon a bronze statue of Columbus in the hamlet of Anjos, wearing his traditional funny hat, leaning into the wind in this tiny village by the sea on the north side of the small island.

Like all of the other villages we saw, this one was nearly deserted, with that sad boarded-up look of Martha’s Vineyard off-season.  Marta, our warm tour guide, showed us a cute little house on the ocean that her mother owns. It’s her summer getaway, here in the village where Colombus came on his way back from discovering the New World.

Our first stop was to another village that required a long and windy drive down to get to, called Maia.  Here we learned that everybody who owns these summer houses actually lives in Hudson, or Somerville, Massachusetts!

On the tiny roads we traveled, each farmhouse had the same blue trip and white stucco, each with a chimney pointed up like a castle turret.  Men drove by in motorcycle trucks, which made loud roars, and cows stood in groups in the fields.

In village after village, we saw either farmers or boarded up houses meant to be occupied by summer holidaymakers.  This is a sleepy island compared with the much larger Sao Miguel. We learned that times are tough here in Portugal, with an impending debt crisis looming, following the pattern of Greece, Ireland and Spain.  On the TV, politicians debated what to do, outside the wind was ferocious and rain fell on and off. 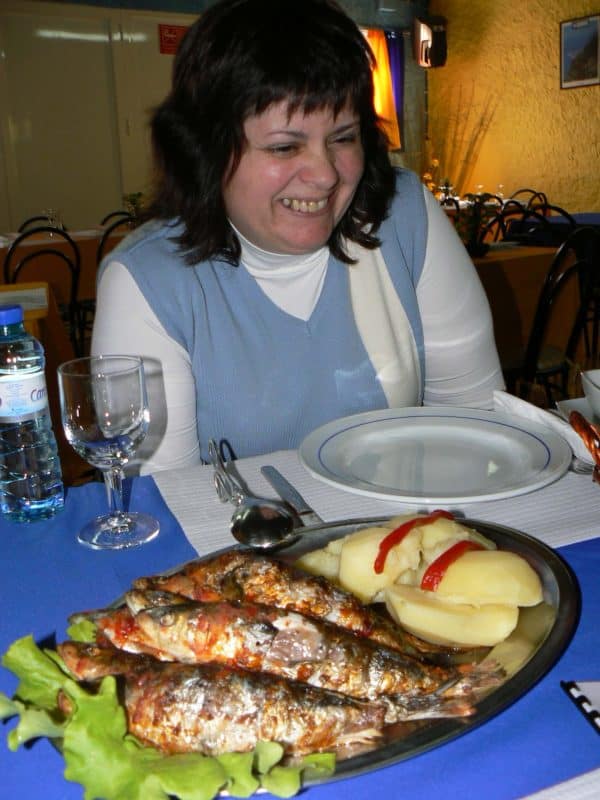 The owners of the Central Pub in the center of Santa Maria of the Villa do Porto are all from Mass, a poster depicted the highlights in the history of the Boston Garden.  Chomping down on the grilled sardines at lunch was a treat, and Marta made us feel very at home showing us the place where she’s lived all her life.

Up From the Ground Came a Bubbling Hot Spring Optimistic and Upbeat, These Guides Showed Us Their Azores