Optimistic and Upbeat, These Guides Showed Us Their Azores 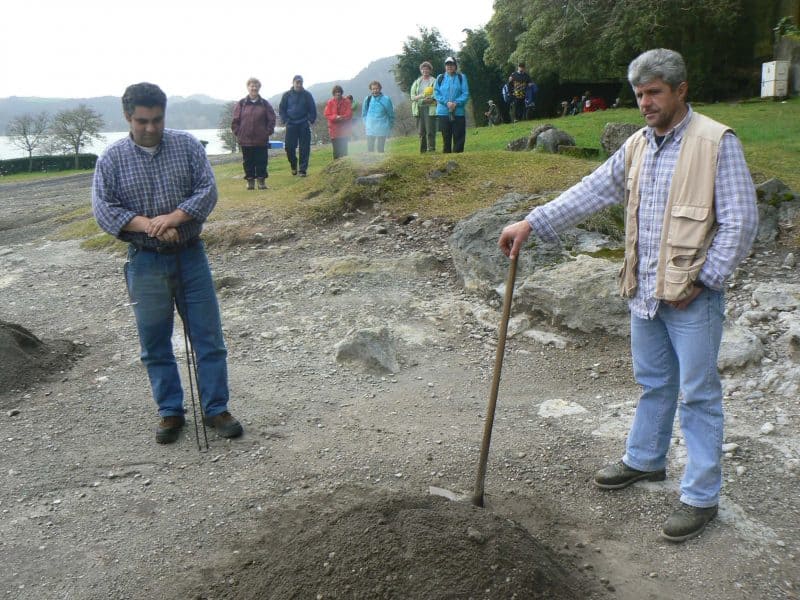 A Cozido, boiled dinner, about to be unearthed in Furnas, Azores.

Just like in New England, they have the same saying here in the Azores…”if you don’t like the weather wait a half hour, it will be different.”  We joined three strapping young guides today and got a chance to hear about the island from their enthusiastic and optimistic perspective.

Tiago Botelho graduated from college a few years ago with a degree in eco-tourism. After his employer, Picos de Aventura, bought the whale watching business he worked for, he’s joined his colleagues at Pico and spends his time piloting the whale watching boats or taking them high up into the Azorean mountains to mountain bike, hike or climb up streams with ropes. He couldn’t be happier.

His colleagues, Paulo and Pedro voiced a similar love for being outside and showing off these green hills and gorgeous views that are all around a visitor to Sao Miguel the largest Azorean island. To a man they agreed that they’re doing exactly what they love, and their smiles prove it. We learned that the guides have found their guests from different countries to have much different concerns.

The Americans often like to know numbers; asking about how many visitors and how much things cost. The British want to know about animals and history. The Portuguese like to eat, and linger much longer over meals than the rest. The Dutch just want to get on with it, and do whatever activity is on the program.

Our first stop was to a horse farm where they also grow flowers for export. We saddled up and in minutes were following Manuel Soares up a steep mountain trail.  It’s been a while since I got on the back of a horse, and it felt great not to be scared of what the beast might do. Mine was a well-trained gentle soul who wanted very much to keep in the same formation following the older dominant male ridden by Manuel.

After our ride, we headed for one of Sao Miguel’s biggest attractions–Furnas.  Pronounced ‘furn-ish’, this village of 1000 grows three times as large in the summer months and features bubbling springs filled with stinky sulfuric volcanic water. A Cozido is a lunch cooked by the steam for six hours and buried under the ground. We visited Restaurant Tony to eat our own Cozido, which includes cabbage, sausage, pork, beef, yams and blood sausage.

With average humidity at 70%, everything stays incredibly green, there is no dry season here. In this climate one of the plants that grows very well is tea. We visited the Gorreana Tea company where we walked through the complex process of turning leaves into the world’s favorite drink.  Green and black tea come from the same plant, just using different processes to keep it either green or black.  On our way home we saw a highway that’s being built to replace the twisty, hazardous roads and learned that a Spanish company got the contract. The hills and gullies the road will pass over seem almost impossible to connect with a straight highway.  They’ve got a lot of work ahead of them.