A Year of Travel…Looking Back through 2009 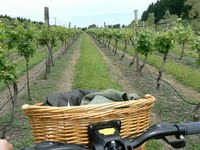 My friend Johnny Jet presented a digest of all of his 2009 travels, and it inspired me to do the same. I often wonder just when I went to a certain place, so publishing the full record is a good way for me to remember them. Below is my 2009 itinerary.

I began at the end of January when Cindy and I went to Cancun and Puerto Morelos, Mexico. I have to say we both enjoyed the smaller fishing village of PM more than the bustling Cancun, but mostly I was glad to experience the delight that is Mexico. What wonderful people and such gorgeous sites to be seen!

My next trip was to Alabama, I waited until March for this trip, which included Mobile and the Gulf Shores. There I learned about the two official factions in the state…either Roll Tide, (U of Alabama) or War Eagle, (Auburn). Everyone chooses their fav and loves them for life.

Then in April I flew down to Beaumont TX, another first, having never set foot in this great big state. This city is near Houston and my trip included seeing Jim Belushi and Dan Ackroyd doing their Blues Brothers Show. A great night out!

In June Paul Shoul and I returned to one of my all-time favorite destinations…in fact it’s the world favorite spot..France. We toured Normandy and slept in a castle. Great oysters and camraderie with one of my favorite road warriors.

Then in the summer it was domestic travel time. I went to the Jersey Shore and found the elusive yet satisfying ‘twilight down the shore.’ A peaceful time after a day at the beach that brings families and adult beverages together in a moment of bliss just as the sun sets.

I also got a chance to see the town where I summered for more than 40 years from the sea…We stayed in the Edgartown Harbor and cruised the Massachusetts Coast in the Isis, a sturdy and seaworthy vessel owned by my friend Denny.

In the fall, I combined business with pleasure and flew to Patagonia, Chile, and later up north to Iquique. It was a chance to meet hundreds of South American tourism officials and fellow journalists, and I was happy to have Sony Stark on the journey with me. What a treat!

We ended the year with our big trip to New Zealand. Having Cindy along made it much more fun, and surprisingly, our second trip there was just as delightful as our first trip in 2007. We blogged and met fantastic people once again. We also got a chance to return to friends we’d met the first time down.

A Town on Tenterhooks In Virginia, the State Now Offers Payday Loans