Will Mount Aspiring Park Be Mined? 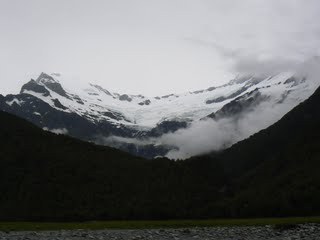 Mount Aspiring is up there in the clouds, this is the glacier as seen from down on the river. Unlike the glaciers up north, this is not actually in danger of melting away, we were told that every year it gets bigger in the winter and smaller in the summer, but hasn’t shrunk the way its cousins in the north have.
In the paper a story said that the NZ Green party leaked a memo that laid out a plan for the government to allow mining for gold, chromium and nickel in up to 20% of Mount Aspiring National Park.
“Browlee’s bulldozers” a negative reference to Energy Secretary Gerry Browlee shows how charged up this issue is…and host of groups here are ferociously opposed to the idea.
Another topic that gets people riled up is using 1080 poison dropped by air to kill the possums and stoats which eat up to 95% of the native bird’s eggs. There are very strong opinions on both sides, but no one disputes that these introduced species breed wildly and are eating tons of the bush every night. Some say to trap them, and some towns create sanctuaries where they poison an area inside an inpenetrable fence, then bring kiwis and other birds back to live without threat of possums and stoats eating their eggs.
Getting Online in NZ: "Please Don’t Skype!" In the Seafinn’s Cozy Cabin, Enjoyment Inside and Out