In the Seafinn’s Cozy Cabin, Enjoyment Inside and Out 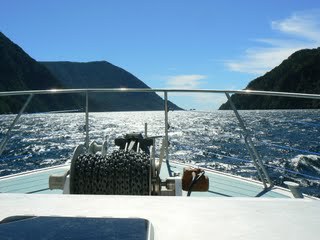 When I reviewed our itinerary for this trip, I didn’t realize that we had saved the best part of the trip for last. Nine years ago I did what nearly every visitor to NZ’s South Island does; I took a bus trip down to Milford Sound and went on an overnight cruise on the Milford Wanderer.

Since those days, guides here told us that the solitude I remember from way back then is no more—now more than 20 boats ply Milford’s waters, and there are lines of up to five boats at a time at many of the dramatic water falls that bring such renown to the place.

We choose to visit Doubtful Sound instead, three times as large and far less crowded with boats and tourists. The boat was also key–it was a 60′ cabin cruiser with just twelve passengers and two crew. When we came aboard and saw the table in the cabin that we’d all gather around for meals, I knew at once it would be more than a chance to see a World Heritage Sight like Fjordlands up close…it would mean making friends with our fellow voyagers in that cozy cabin.

Gill and Steve, from Liverpool, had rented a caravan for their NZ holiday, and they told us tales of getting used to living in ‘their shell’ which both surprised and delighted them. We made mental notes to investigate this option on our next trip. Brian and Eva, two actors from New York turned out to be a couple we’d seen at the Red Cliff Restaurant in Te Anau, and were charming and fun. So many stories, and so much time to get to know 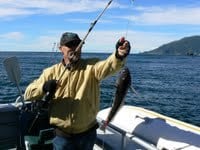 people as we all delighted in watching the bottlenose dolphins who frolicked in the boat’s wake and performed tricks for us as we cruised the remote fjord. Whales have been spotted here, as well as several other species of dolphins…up on an island, we saw Fjordland crested penguins jumping into the water.

Perhaps the most fun for me was when we dropped fishing lines baited with barracuda into the rolling waves of the Tasman Sea. We pulled up about ten fish, including my prize cod that took the prize for the biggest catch. Tasting these filets, hours old, that night was a true pleasure.

But it wasn’t the fish, nor the perfectly sunny weather, nor the staggering scenery, it was a feeling that once again, our favorite country never disappoints us. How many times can a return trip to a beloved place turn out to be just as much fun as the last time? Count one for NZ!

Will Mount Aspiring Park Be Mined? He Wants to Race Cars Down a Steep Slope