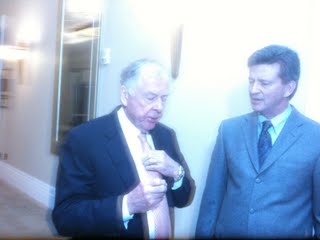 “The best time to plant a tree is 2o years ago,” said T. Boone Pickens today, as he sat on stage and talked about his ambitious plans to radically change the energy policy of the US as soon as he can. “You’ve gotta have a plan…and so far we don’t have one.”

His plan starts in a logical place, and it’s incorporated into House Bill No. 1622. “This would require all 18-wheeler trucks to run on natural gas. This would cut out 2.5 million barrels of oil a day, and we get about 5 million from Saudi Arabia. So it’s a pretty good start.” Not to mention the effect on emissions, if nearly all of the country’s 6 million big trucks ran on clean natural gas, it could clear the air in many cities. “In Los Angeles, they did it with their garbage trucks,” Pickens told me. “They switched the trucks one by one, as they needed to be replaced, to run on natural gas, and it’s done a lot to improve LA’s air quality.”

I asked Pickens what he thought the trucking lobby would say about his idea for them to spend all of this money on replacing existing technology. “I sat with JB Hunt, Swift and the Wal-Mart people,” he answered. “The president of JB Hunt said he hated our foreign oil habit as much as I do. They don’t want to support our dependence on it either.”

Pickens is also the developer of the world’s largest wind energy facility, although it’s been pushed back til 2011. His order for more than 650 GE wind turbines is the biggest in the company’s history, but he can’t locate them where he originally wanted to, in the Texas panhandle, because the transmission lines are not yet in place. “What will you do with them when you get them?” I asked, remembering his famous quote in the Wall St. Journal that he’d ‘put them in the garage.’

“We’ll put them up somewhere, in the mid-west or another area,” he said. And I fully believe that both his natural gas and his wind program are going to change the energy landscape. You don’t become a billionaire without a lot of smarts...Pickens is the real deal.