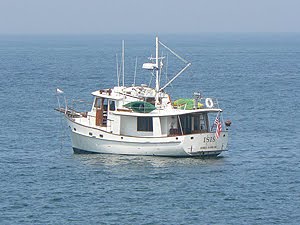 I spent some time in the heat of the summer on a boat off the Massachusetts coast. I was told that this vessel used very little fuel, because they cruised at a leisurely 8 miles per hour. I read today about an even more economical way to cruise on water, using hybrid powered boats.

According to Earth Talk, in the Daily Hampshire Gazette, there are now ferries that ply the San Francisco Bay and use electric powered batteries. The Hornblower ferry over to Alcatraz and Angel Islands is powered by several alternative energy sources, including a hybrid diesel-electric system powered by solar cells and wind turbines right on the deck.

There’s also a 24-foot boat you can buy that uses just 11 cents for an entire day of cruising. A small diesel motor kicks in when the eight batteries run down.

The US Navy is also interested in hybrid boats, since they love being able to sneak up on the enemy without making that putt putt sound of a gas engine.