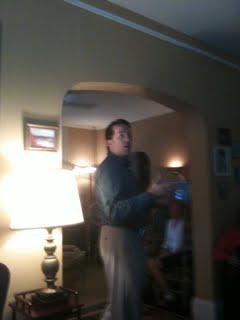 I don’t vote in the city of Holyoke, yet tonight I spent time listening to a candidate for city councilor in this fine city. His name is Aaron Vega, and I think he got Cindy and Leona’s vote. We were invited to our friend John Lachappelle’s house and mingled with our friends and neighbors while we heard the candidate give us the pitch.

It’s refreshing to see a young guy like Vega step up to the plate and join the fray. Many of us complain about problems in our cities and towns, but few of us have the stones to actually take out papers and run. Vega’s dad is well known in the city, and his wife is another asset, warm and approachable, and she’s as enthusiastic as he is about getting elected and making a difference.

Vega has some interesting ideas, like getting downtown neighborhoods cleaned up by fining landlords who don’t clean up and rewarding the ones who do. He also said that Holyoke should market itself as a green city, with our bounteous hydropower and the potential for windmills on Mount Tom. All in all, Vega has energy and charm, two attributes that will be key to succeeding in a crowded 15-member council.

So far I haven’t convinced Cindy to put up a Vega lawn sign, but who knows…she liked him and I think he’s got a lot of promise on November 3.

Getting Back on the Road in a Big Way At 13, Delcie Was Already A Businessman