Rahpeymayi: We Walk in Silence in Iran 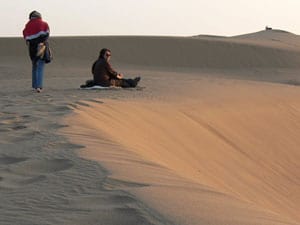 hi again 🙂
first of all thank you very much.
(rahpeymayi) i mean we walk in silence in the street during a long distance with our want in our hands..as you certainly see in news in VOA or BBC…we don’t want war or roghness ,we have been walking during these days till we can took back our vote and our right. we love police and our people we just want a clear answer just it 🙂 we keep doing this till they give us our right and act like a real civilization country , because we are so wise and strong and nobody can tell lie to us 😉
i hope you get my mean! my english is not very good i’m so sorry.
again thank u 🙂

I spent much of last night alternating between two fascinating things: an HBO movie special, a film about Farah, the Shah of Iran’s Queen, made by a female Iranian filmmaker, and the Twitter stream called #iranelection, that provided up to the  minute news, links to video, and fantastic photo slideshows of the masses walking with the defiant V of their outstretched fingers.

The movie focused on Farah’s life today as a celebrity former royal, who is still regarded with the deference befitting a queen. The filmmaker is told to leave, then comes back nine months later and becomes very close to the older woman.  We also see a scene with the son of the Shah, Reza Pahlevi, who is very well regarded in LA’s huge Iranian community.

Funny, going from history before 1979, and what is happening RIGHT NOW in Tehran.

An Email From Iran Buried in the Fine Print: Money for Bike Commuting