A French Market: Where Bizarre Shellfish Can be Found 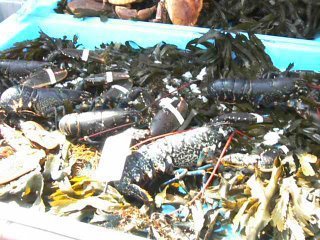 We learned when we first arrived in Granville that this coast is famous for shellfish, and that the lively city where we were staying was the de facto capital of the area, since it is the largest town on the coast. This morning we got a chance to see the spoils that are brought up from the Atlantic in the downtown market, that starts in the main square and winds its way up and around nearby streets.

I found out what the Bulot looks like–they’re giant snails. We also saw white squidlike creatures about five inches around and eight inches long, with eyes the size of nickels, cuttlefish, I think. The people all over the market were friendly and eager to share samples of the delicious local andouille sausage and then I tried a cheese made from both cow and goat milk from a farmer.
The most popular stall was the one selling long sausages cooked over a charcoal grill. They pile on french fries wrapped right in with the french bread with the sausage, and slather it with mustard. I held off on the fries as I watched Shoul devour his. Enough calories to kill a horse, was how he described it.
Later we got in the car and drove through fields and past tall hedgerows to Barneville-Carteret, a sleepy beach town with not a lot going on, but the ocean front and center. Our hotel here affords us elegant views of the sea, and tomorrow morning we’ll watch the tide come up a thousand yards to just in front of us. Here is a view from the top of the casino of Granville’s Atlantic coast.
The Shooter Meets the Painter in Granville Pouring a Bell in Villedieu-les-Poeles