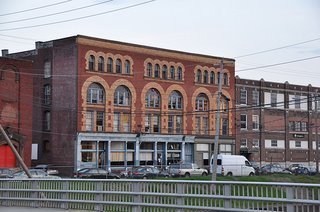 Some evenings shine brighter because it seems you’re just in the right place at the right time. Last night I hit two cities that both drew energy from the enthusiasm of the people who were there. I began with a Compari and soda on Shoul’s back deck, a bright red drink I’d heard of but never tried. Refreshing!

We drove down to Paper City Studios on Holyoke’s lower canal to a massive art opening for about a dozen artists who have their studios there. The building has six tall arches outlining the upper windows in decorative brick, and inside the studios have high ceilings and lots of space. The crowd was deep, people milling outside holding drinks, and we entered a big room where girls dressed in black brought out delicious food like satays, steamed buns and platters of chicken. Signs directed us to visit more studios here, and to veer off there to find photography. I ran into John Williamson, affable old bud, and saw Marc Berman and his wife Betsy, and my blogging buddy Peter Van Dog. who took the photo above.

We made our way through room after room, each unique and filled with chatting artists sipping wine, until we got to the top floor, where old friend Ben Banville had a massive installation, with dangling points and a giant farm implement. Across the room, Amy Johnquest had thousands of plastic balls laid out in a pattern near three mysterious old vending machines. The art reminded me of what I’ve seen at Mass MOCA, I didn’t get it but I did remember it. We talked to some of the artists who moved down here from Florence to save about half the cost of rent, across the street at Canal St. Studios. What a view one artist has, a cozy seat by the big window overlooking the canal!

But our night was young, and I had to bring Paul and Pam to my new Holyoke fav, so we drove to the Bungalow. It was a balmy evening and we enjoyed a drink on the patio next to the roaring firepit. “A lot of people come for the first time and don’t come back,” said a manager there. But my Northampton friends were very impressed with my secret.

We didn’t stay as long as I would have liked but it was time to head up to the city that is used to claiming all of the Valley’s nightlife. We walked into La Veracruzana to a raucuous scene, a latin band was blasting salsa and meringue and the crowd was dancing wildly. Owner Martin Carrera brought us beers and told me he’d love to open up a family style Mexican place in Holyoke. The band, led by Freddy Chapelliquen, was called, MarKamusic and had the crowd going wild playing Colombia songs and then Oye Como Va, to the delight of the dancing crowd.

I turned to Shoul and as we chowed down on enchiladas; we agreed that Northampton’s still the place to be on Friday nights….even as Holyoke gets better and better.