The Earliest Residents of Cancun Had Iron Guts 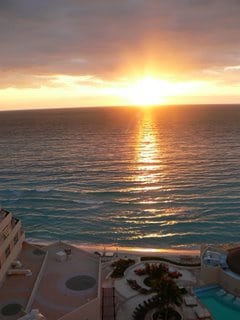 A brilliant sunrise got us out of bed early in our hotel, the sun beaming right into our faces. It was an opportunity for Cindy to practice with her new Lumix camera, trying again and again to get that line out of the shot when she shot into the sun.

Last night we were invited to have dinner at Silk, the Asian Teppanaki restaurant here at Me by Melia. The chef, Juan, stood behind the big black grill and flipped food up and down and rapped his knives on the surface. He made a little fire of oil inside a pile of onions and let it flame high. He was friendly and outgoing, originally from Peru. He learned all of this flipping and grilling at Benihana in Lima, he said.

The people here are genuinely friendly, going beyond just the expected hellos and goodbyes. They give you their fullest attention and to a person they’ve been welcoming. You get the feeling that since this city was built in the early ’70s exclusively for American tourists, everyone here is on the same page…no surly waiters and no snippiness. Wherever we’ve been the servers have been outgoing and sweet to us.

I read a bit about the area’s short history—Cancun, (or in Mayan,”snake’s nest” ) was created with filled in sand and the earliest explorers said it was a nightmare, with every kind of biting insect and snake imaginable. One French scientist said that the average Mayan’s intestines were like a museum of microbes. So many tiny bacteria that would in the years to come make many visitors sick.

The planned city had few models in those days…one was Brasilia, the capital built in the distant jungle and spurned 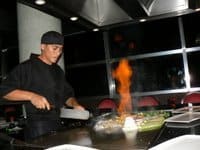 by nearly everyone in Brazil who wanted to stay in Rio. Fortunately, Cancun has not suffered such a fate, and today more than one million people live here. More than two million tourists come to visit staying in one of 28,000 hotel rooms in 145 properties squeezed onto this 7-shaped peninsula.

Cindy loved the area in the hotel where I found the big book of Cancun’s history. It’s called the E-space, it has rows of computers, full bookshelves, recliners for lounging and a Pottery Barn sort of ambience. There’s also a pool table and a little pastry case.

A full Sunday with nothing to do except putter, lounge and fiddle with gadgets. We love it.