Mexico, Where Have You Been All My Life!? 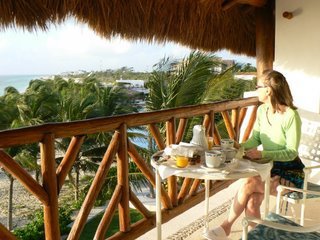 When I called my dad to tell him I was heading to Mexico, he groaned. “Oh Cap, do you know they’re having a civil war down there?” He groaned too, upon my announcement of trips to Iran and Colombia.

But as with those trips, fear hasn’t been on the agenda here in the vast Yucatan peninsula. Mostly it’s been marveling at why it’s taken me so long to visit this fantastic, charming, beautiful country just 4 1/2 hours away!

I asked my friends Erika and Prof. Pedro about the “civil war”, and the turmoil that is being created by drug lords killing other drug lords and the battles on the border. They said that in Cuidad Juarez, the dirt poor city next to El Paso, there have been killings of hundreds of prostitutes and other young women that have been unsolved for fifteen years. A customer in the GoNOMAD cafe told me about a carjacking in the quaint ex-pat filled town of San Miguel de Allende.

But the geography is kind to us…we are thousands of miles away, on a big peninsula that faces Cuba. The economy here has been robust, though the peso, at 13.5 to one dollar, is definitely tilted in our favor. “It’s been around 7-8 for many, many years,” said Erika. “This is the worst it’s been for a long time.”

Last night we ventured out to one of the two restaurants here at Ceiba del Mar. At the first, devoid of customers, we were given a menu by mistake from the second place that’s nearer the ocean. We realized we wanted to leave, to pick from the menu we liked. but we were sort of trapped. We tried to politely excuse ourselves, and get by with just a drink as the persistent waiter jumped through hoops to make us stay. But we escaped after much protestation and were welcomed to the much busier Arrecife where hogfish and sea bass were served up grilled with five sauces and lots of vegetables. The elegant dinner for two, with a bottle of wine we were able to bring home with us, was under $85.

Today I head out to a place in the jungle called Selvatica. Cindy will do nothing but sit, read, nap and maybe drink a glass of wine here at Ceiba del Mar. Sounds perfect!

The Title Says a lot: Prof of Sustainable Tourism Zipping Down the Zip-line, Plunging into the Cenote