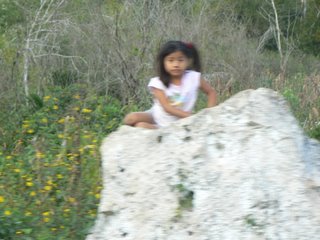 I’m liking Cancun much more than I thought. I remember running into a very suave tourism official, Emilio,while I was on a river cruise in Pittsburgh back in June. As the boat made its way up the Ohio River, all of the passengers were either journalists, PR folks or Tourism board officials. He came up to me and gave me a card, telling me that he was sure I’d like coming to Cancun.

“But we don’t write about places like that,” I pleaded weakly. But he said he knew there were places around here that would make good article topics, so he pressed his card in my hand. I knew that around this time of year a place like this would be a temptation…so here we are.

Despite the prevalence of American tourists, and the lack of Spanish language in the air, I like it here. It’s full of the kinds of amenities that you need when you just want to get away. We spent hours on a big bed with a thatched roof overlooking the water. We dozed and read and had lunch brought over. Cindy wore the only one-piece suit I saw the whole day. Hey, how can you not like that?

Later we took a walk down the big boulevard to a mall called La Isla, which had a real river running through it and lots of typical mall shops. The prices of sunglasses I looked at were way too high, just like in the US. (I settled for cheap drugstore glasses, since I lost mine yesterday.) At the edge of the mall there was a dock, and the water of the lagoon lapped up against pilings.

We did what Cindy and I like to do on vacation: putter along, poke into shops, and we stopped for an espresso where we could people watch. I noticed that many of the Mexicans who passed by were overweight, like the way Americans often are when you walk through a Wal-Mart. Not that there’s anything wrong with that, hey I’m working on losing a few pounds myself. So to feel better we hit the gym here at Me by Melia, and now we both feel great.

The Earliest Residents of Cancun Had Iron Guts In a Pumpkin Patch, A Cave Entrance is Found