They’re Visiting Saudi Arabia and Have No Fear 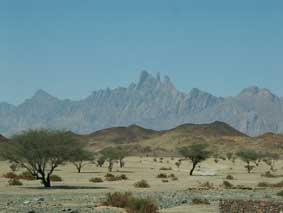 Elbert and Bernice live just above Cindy’s house in Holyoke. Their dwelling, which they designed themselves, is one-of-a-kind; an octagon with a round ceiling and lots of odd-shaped windows. We joined them in this house for dinner last night.

The couple embody the idea that keeping your mind busy keeps you young, since they are both retirement age yet are more involved in their community and in their own interesting projects than people half their age. Elbert loves to take college courses…he takes two a year and lately has been studying literature and video production. “I’ve started a company that makes videos for nonprofit agencies, who have small budgets and can’t afford to hire a big production company,” he explained. Bernice has many gardening projects and is building a stone wall outside their wooded home. They are both starting a neighborhood watch to keep residents in touch to combat crime here in Holyoke.

Over salad, they said they were going on another trip soon, and that perked up my ears. “Where are you going?” I asked, thinking they’d answer Sanibel or perhaps the Virgin Islands. “Saudi Arabia, Israel, Sinai and Jordan,” they replied brightly. Wow! They explained that they love to travel with a company called Overseas Adventure Travel, and that they take trips like this because they can learn about the people, experience the cuisine, and hike and bike through exotic places that are out of the mainstream. They’ve joined this same company on trips to Peru, Turkey and France.

I told them how much I admired them for planning a trip to the Middle East in late 2008. Even as I write this, Gaza is being bombed by Israeli planes and things are getting even tenser than ever there. Still, visiting Americans who are eager to learn about the culture, break bread with locals, and aren’t carrying attitudes are what the world needs more of right now.

Elbert popped in a DVD he shot on their last trip to Turkey, including a scene where they hiked up a hill to have tea with a shepard family in a remote island. On the video, their guide said that people needed to see Turkey because many people around the world have bad feelings toward the Turks. When Elbert and Bernice take their short excursion to Duba, Saudi Arabia while on board the OAT ship, I’m sure they’ll meet locals who will tell them the same thing.

There couldn’t be two ambassadors for America who will better represent us than this lovely pair. It was refreshing to hear their stories and to learn about their busy and fun lives.

In 1527, Cabeza de Vaca Stopped Wearing Shoes Do You Think This Will Get Us Some Good Staff?