I’d Rather Die Than Ride These Coasters 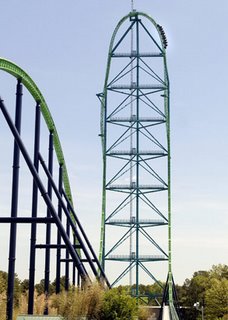 Last night while we were waiting for Cindy to arrive to go up to the Voo in resurgent Turners Falls, a television program on the Travel Channel caught our attention. Francisco and I looked aghast as the show, called “Extreme Terror Rides,” described North America’s most fearsome ‘fun’ rides and took the cameras along for the ride.

The degree of horror got worse as the show wound on. First we saw a ride at King’s Island in Ohio that had riders strapped in, facing backward and on their backs as they climbed up and up. Then when they’ve reached a staggeringly high height, it turns them over so the rest of the ride is done hanging upside down, zooming around curves and up more terrifying heights. Oh God, we both agreed, there isn’t enough to pay me to even go on that once.

But it got worse when they took us up to Alberta Canada, inside the continent’s largest indoor mall. Here they have a ride called Galaxyland that seems almost innocent, a regular coaster, but that achieves a speed of 65 mph as they plummet straight down from the rafters to the basement. They hit something like 4 g forces as they go around tight corners.

As if there couldn’t be anything worse…it was on to New Jersey’s Six Flags, in the Pine Barrens. Here, rising from the ground, was the Kingda Ka, what looked from a distance like an upside down tuning fork. Oh, no, it can’t. Yes the freakin’ tram goes all of the way up, 456 feet, straight up, and then bends at the top to crash straight back down. At this point I was nervous just watching it on TV. Ugh, why, why would anyone pay to be so terrified?