Just Then Another Lady in a Bikini Popped Out 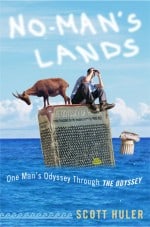 Scott Huler wrote a book about the trail of Odysseus, called Öne Man’s Odyssey, and we published an excerpt on GoNOMAD. Here is a nugget I enjoyed.

Heading towards a beach camping area that I thought might provide at least some shade and perhaps a public toilet, I passed a wooden post outside a little tiki-hut shop that rented scooters and bicycles.

On it I saw the little white “i” on a blue field that is the international symbol for information, and the words “English! Deutsch! Francais!,” all with happy little exclamation points. It was, literally, a sign.

Sweating, miserable, and at wit’s end, I followed Odysseus’s model. I walked in, dropped my pack in front of the table that served as a counter, and spoke a single word: “Help.”A small woman with long dark hair, a deep tan, and a bikini top broke into a wide smile. “Help!” she sang, “I need somebody. Help! Not just anybody… Help!”

When you ask for help and they begin singing Beatles songs to you in your own language, this is a good thing. Then she stopped singing but kept smiling. “I’m not really looking for a scooter,” I said. “Just a room for the night.”

She brightened. “Oh! Like a bed and breakfast!” she said. “Would that be okay?”

Before I could so much as nod she pulled from behind some bushes another lovely woman in a bikini, whose name turned out to be Rosie. Bikini number one smiled. “She runs a bed and breakfast,” she said.

Did Rosie have a room available? She did. Was it expensive? It was not. Would I follow her? I did, humping along with my pack as she rode a block ahead on her scooter, then waited until I caught up, then rode another block.

And so on to the Casa Schmidt, at the end of a long narrow road it would never have crossed my mind to wander, where she put me in a clean room with screenless windows (I was not to mind the geckos, which Rosie charmingly pronounced “jeckoes”) and access to a tiled private breezeway where I later enjoyed, in the cool of the evening, one of life’s greatest pleasures: an outdoor shower.

This asking for help is powerful stuff.