A Christmas Tree with Lit with Candles in Stockholm 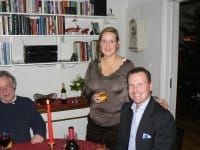 From my previous trip here to Sweden last December I knew that the holiday of Christmas is celebrated with more vigor and enthusiasm here than in any other country. This darkened nation revels in their candlelit doorways and every window in the city has a triangle of lights or a lit up star.

Last night we had a family dinner with Ann-Charlotte and Fredrick Jonsson, in their fifth floor walk-up apartment in the city’s Ostermalm section. It was a brisk walk in the cold night air and we g 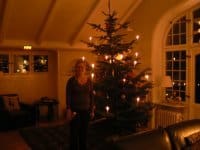 ot a chance to learn from these Stockholm natives about what’s being talked about and their favorite cafes and restaurants.

Ann Charlotte also lit her Christmas tree–a real tree with white tapered candles. Lit the old fashioned way trees were once done in the US, and it was a beauty.

They said that the biggest news here in tourism is a new congress being built that will hold 3000 people for events and conferences here in Stockholm.

The Jonssons said that a new government in Sweden is bringing a more conservative approach, cutting back a bit on the lavish benefits that most people here have gotten used to. They both seemed to appreciate this more realistic way of governing and said they were glad it is moving more in this direction. But other Swedes we met disagree…they cite the privatization of the hospitals and subway systems as examples of bad ideas done by the ‘moderates’ who used to be called the conservatives.

I asked what the most current news is out of Stockholm: they said it was a case of a store that was videotaped by a local TV station exposing how employees were taking out of date meat into the back and repackaging it for sale. But they were caught red handed by the tapers.