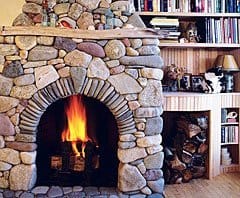 This morning I learned about a man on Martha’s Vineyard named Lew French. He is a perfectionist, a tough taskmaster, and a wealthy artist…but he doesn’t do it for the money. He was profiled by the TV show Sunday Morning’s Steve Hartman.

French fits stones together in an otherworldly way. He finds stones three miles away from each other that fit like gloves next to one another. He makes elaborate fireplaces, interior stone walls, and fantastically cool pool sheds all made of stones that fit together without mortar or any cement.

One job he did during the show was a three-story interior wall inside an expensive home. Every stone fit perfectly, there was no more than a few milimeters of gaps between them. The job took a solid year to complete, and costs hundreds of thousands of dollars.

I guess he’s living on the right island. The Vineyard and nearby Nantucket are full of folks who think nothing of that kind of expense. French’s son works for him, and told Hartman that it’s hard working for such a perfectionist…that usually the stones he places his dad promptly moves. But when the hearths are done, and those stones that fit so exquisitely together are displayed…wow, that must be an incredible feeling. And a good paycheck too!