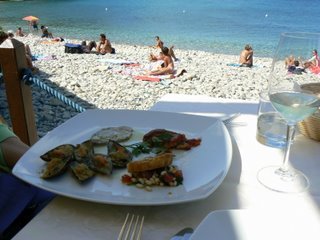 Elba is fantastico and fabuloso. I knew we’d like it here but I didn’t count on such stunning cliffside vistas, such gorgeous beaches, and such crisp dry wine and fresh from the sea meals.

We began our day at the Hotel Ilio and met Maurizio, who had just returned from Milan. He’s getting his masters in marketing. “You know how you have passions and you have your job? I have this hotel but what I really love is marketing and promotion. So he runs his own PR shop and helps promote not only this hotel but this part of the island and Elba proper.

Over coffee we reviewed our maps and decided to go to Marciana Marina, where a long protected harbor is flanked by a concrete seawall and a long beach is filled with Sunday morning loungers. We walked its length and made it to the end where we found Attilio’s Ristorante Capo Nord.

We walked in and immediatly were greated by our host. “Max! GoNOMAD!” he said, and brought us to a prime table overlooking the stony beach and sunbathers basking on the rocks on the far right. We decided to leave lunch in his capable hands, and he didn’t disappoint, bringing out a plate of appetizers of tuna, anchovy in tomato sauce, little white beans and mussels with breadcrumbs. It was all delicious and the sun shone brightly as people teeter-tottered their way into the sea.

Then he brought us pastas with swordfish chunks and risotto with octopus, redolent of the nearby sea. The wine was from Elba, crisp and dry. Later Maurizio met us and we followed him in his silver Porsche Cayman up the winding roads into the hills to the tiny village of Poggio. Here we met Roberta and learned about the wonderful work she does with orphans in an impoverished Kenyan village. More on this amazing woman later.