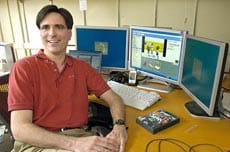 We both felt wobbly Cindy and I, after we read in the WSJ about Professor Randy Pausch,45, and his graceful grip on his exit from this world. Diagnosed with deadly pancreatic cancer, he strode up to the lectern at Carnegie Mellon University to deliver his final thoughts. The last words, in what is commonly known as ‘his last lecture.’

Jeffrey Zaslow described it. “He began by showing CT scans of his liver: ten tumors were revealed. He showed slides of his life. His childhood dreams, to win stuffed animals at carnivals, to walk in zero gravity, to design Disney rides, to write a world book entry. By adulthood he had achieved them all. He and his wife have three little kids between 1-5.

Flashing his rejection letters onto the screen, he talked about setbacks in his career, repeating: Brick walls are there for a reason. They let us prove how badly we want things.” He saluted his parents, who let him make his childhood bedroom his domain, even if his wall etchings hurt the home’s resale value. He knew his mom was proud of him when he got his Ph.D.

He showed pictures of his bosses and students over the years, he said that helping others fulfill their dreams is even more fun than achieving your own.”

He was a brilliant professor, inventor of a software that allows people to create 3D animations, and he challenged his students to try and invent a video game without sex or violence. They all rose to the challenge. “Like Moses, I get to see the promised land, but I don’t get to set foot in it,” he said.