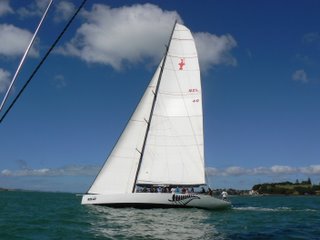 On the ferry over to Devonport, a peninsula about 15 minutes from downtown Auckland, the wind was whipping even though the sun was shining brightly. I knew that would bode well on my next excursion….sailing on an America’s Cup boat out in Auckland harbor with Sail New Zealand.
I didn’t know we’d be asked to do so much of the work…but it turns out it takes about 12 people to operate one of these racing vessels. We ended up winning the race, pivoting around the green buoys and with our red spinnaker bulging in the stiff wind we beat them by about 12 meters.

The masts of this boat tower at 119 feet, and there are four stations where sailors have to crank the handles to tighten the lines. Furiously cranking away, we were instructed by the crew “guys, grinding forward,” hold. “Grinding backward, slowly now.” It was exhilarating and exhausting, and we took turns manning the cranks.

As we passed under the big Auckland bridge, a bungee jumper was making his plunge toward the water. On his rebound recoil, he gave us the big thumbs up. I later repaired to Cowboy’s Pizza Kitchen, right on the harbor, for a Radler Monteiths brew, that has a taste of lime with the lager. The waitresses with their low-cut yellow tees and cowboy hats said tips here are no problem. “But since we don’t expect them from Kiwis, it’s almost nicer when you get one. I slurped down six Bluff oysters served on lemon slices, and made my way to the Link bus back up to Ponsonby Road.