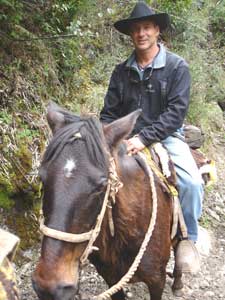 Peter Heller has a new story on GoNOMAD, and I love it. He’s got a peculiar talent, nobody I know has his description power and soul searching ways of writing. He makes his points eloquently, and gently, and this is the first story of his we’ve had the privilege of publishing.

I saw him off last October in Santiago, as I headed back to the states, my plane heading for JFK, his for Argentina, where he embarked on this horse packing trip. He is now taking flight lessons in Montana, learning how to be a bush pilot. Hope to read about this soon in one of his articles for National Geographic Adventure, Men’s Journal, or Outside magazine. Here’s a snip of the new story.

Men, people, belong on horseback. There is something deep inside that sings as soon you are in the saddle. The vantage from that height; the shifting and moving of the living animal beneath; the dance of wills. Every man on horseback takes on a certain nobility that he may or may not deserve. Sometimes I think that’s why people love SUV’s: they set the driver at horse height and jingle something in the DNA.

Chile has had a strong horse culture for more than three hundred years, born when Pisarro landed on the continent’s breast, with men and horses and subdued an Inca nation of over a million battle hardened warriors. I was curious about the working tack used by the huasos. Instead of a leather saddle with attached cinch, they used a spare frame of wood saddle bars which they covered with three folded blankets and two pads of sheepskin.

The cinch went around the whole outfit and the horse and snugged tight, and you sat on it. The advantage was a very lightweight rig that was comfortable as a good chair. Instead of stirrups, I slid my feet into tapaderos — enclosed wood clogs that kept sticks and brush from getting caught. I noticed that Ciro and the boys wore black rubber boots and spurs. I guess that in Patagonia, one of the rainiest countries on earth, that made sense.”